For whatever reason, readers of Montana’s Historic Landscapes have been very interested in Daniels County, way up in the northeast corner of the state.  In previous posts I have discussed the Daniels County Courthouse–one of my favorites–the county’s historic rural schools and Flaxville, one of the most interesting tiny towns left from the homesteading era in all of eastern Montana. 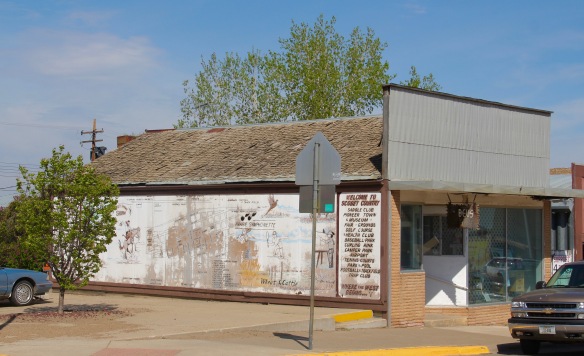 Today I want to look back at Scobey, the seat of Daniels County, which was established in 1920 at the end of the homesteading era.  Sometimes it is referred to as the most isolated county seat in America.  But whatever its isolation may be, I found Scobey a relaxing, interesting place, and actually took many images.  But outside of the courthouse, schools, the fairgrounds, and wonderful Pioneer Museum, I did not share much with the readers.  This post changes that. 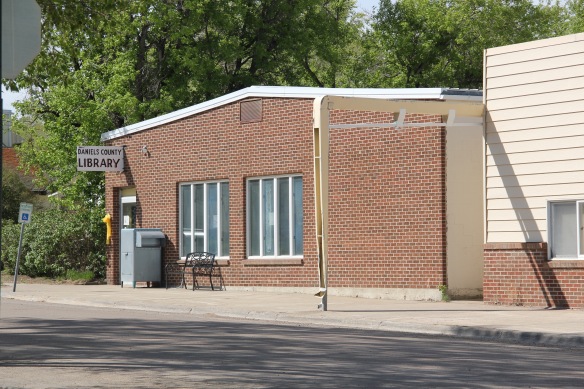 The county library, above, is small but busy, a reminder of how important these public buildings can be.  About 5 years ago, the time of my last visit, Scobey still had its own medical center, below, as well as a distinctive post office, different from many in the region due to its modernist style. 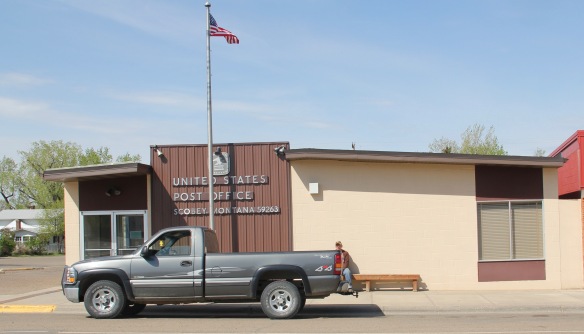 Much of its past remains, and remains in use.  The railroad corridor had changed–the passenger depot was gone, but historic grain elevators still mark how Scobey was a major grain shipping point for much of the 20th century.

Historic churches have left deep roots in Scobey.  Below are the Scobey United Methodist Church, the Scobey Lutheran Church (which has a wonderful Gothic altar), and St. Bonitus Catholic Church, another example of mid-century modern in the Catholic church buildings of Eastern Montana.

The residential area has plenty of vernacular-styled 20th century homes, most from the first half of the century.  I particularly liked the next two bungalows on Timmons Street.

Five years ago the business district had clearly weathered the 2007-2008 recession and lots of stores and bars were open, anchored by Independence Bank, another example of 1960s-1970s modern commercial style in Scobey. 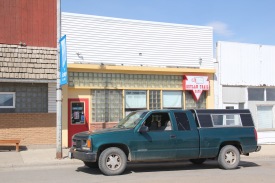 Businesses from the first decade of settlement also were part of the “downtown” fabric, such as this historic two-story Masonic Hall and the Pioneer Hotel, which once served as a first stop for homesteaders upon their arrival in Scobey. 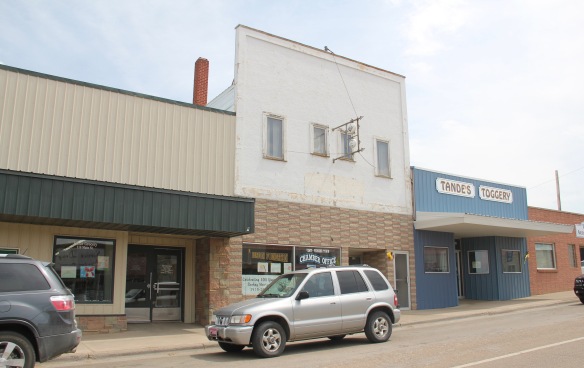 There is a persistence in Scobey that is admirable.  The Daniel County Leader, the local newspaper, also has weathered the storm of media change in the 21st century and stands in the heart of town, still undoubtedly serving as a community communication center. 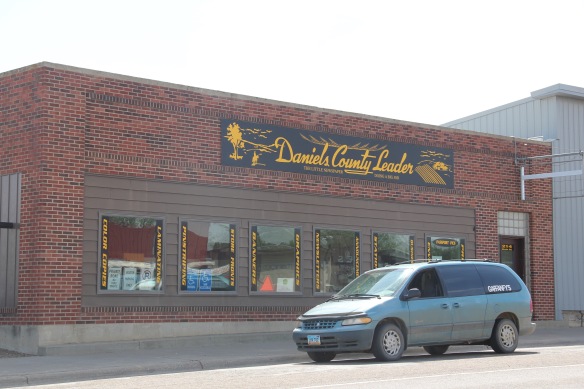 How I missed these properties in my initial post–well I can’t explain that.  I am sure I had a good reason 5 years ago. But what is really inexplicable to me is why I did not share more of my photos from the Scobey School–especially its football and track field below– 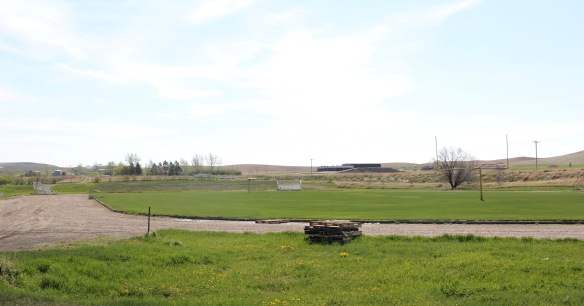 along with more interior images from the Daniels County Courthouse, the one building in Scobey that is listed in the National Register of Historic Places.  Here you see the courthouse’s long hallway (with its National Register sign in the corner), the records vault, the courtroom’s jury box, and the jury room.  Just walking into this place takes me to the beginning years of Daniels County. 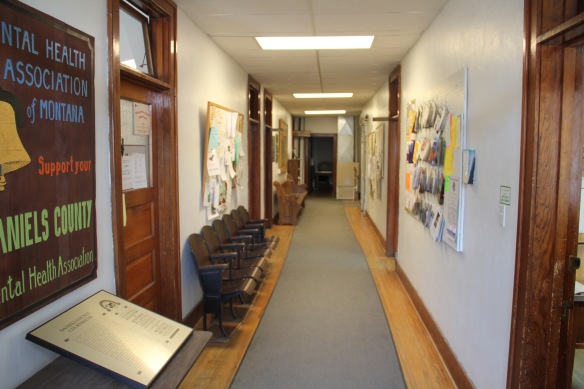 One property type many people ask about are cemeteries.  Unfortunately I did not have the time to record every tombstone in these places–another time, perhaps.  But I can add to the blog additional images from the Daniels County Cemetery, which lies outside of Scobey.  These images hardly cover everything but they do document what a special place this tiny county seat is, for residents and for visitors willing to go exploring. 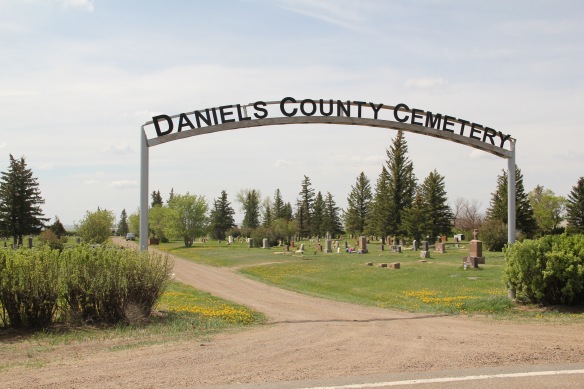 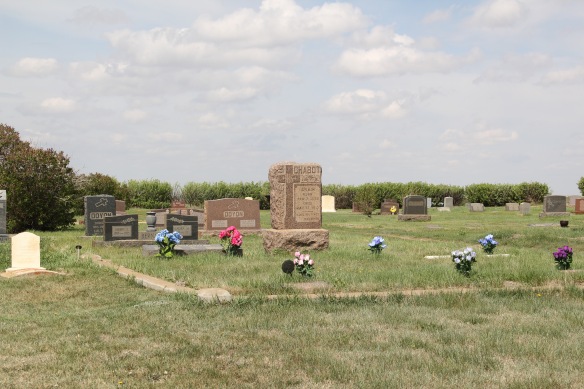 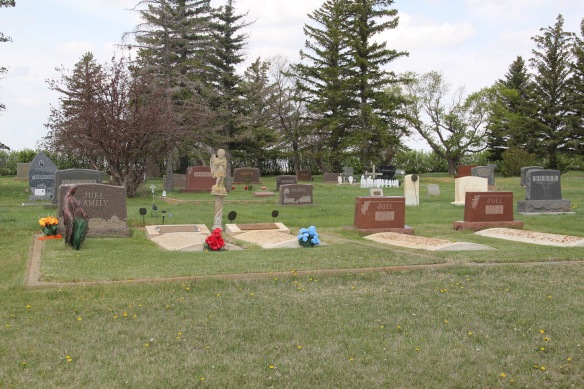 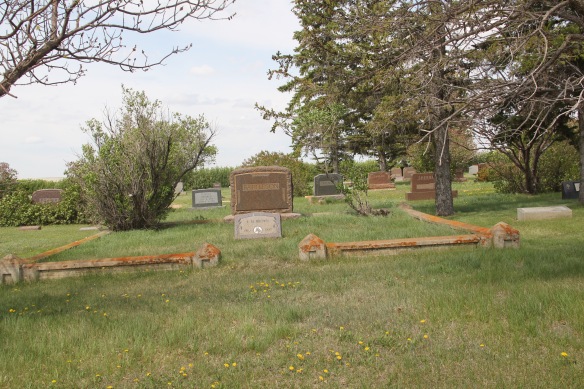 Recently one of my graduate students from almost 20 years ago, Carole Summers Morris, contacted me.  Carole had just discovered that her family had roots in Carter County, Montana–and she wanted to know if I had ever been in Ekalaka.  I told her yes, in 1984, as documented by the postcard below I picked up on that trip, and most recently in 2013.

I pointed Carole to my December 2014 blog post on Ekalaka.  When I visited that post itself, to remind me what had caught my eye in Ekalaka in 2013, I found out that I promised another post on the area–and had never done it.  So, to honor that initial promise and to show Carole more of the town, here is Ekalaka revisited. 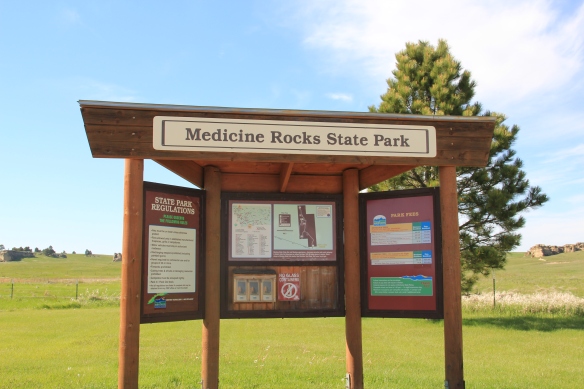 My big omission in the December 2014 post was to say something about Medicine Rocks State Park.  As I drove south on Montana Highway 7 to Ekalaka in 1984, nothing quite had prepared me for this collection of wind-carved rocks lining both sides of the highway.

I immediately thought that here was a landscape of both natural beauty but also of great cultural significance.  In A Traveler’s Companion to Montana History (1986) I noted that “The Sioux called the country Inyan-oka-la-la, or “rock with hole in it.” The Medicine Rocks, which stretch for several miles, have ceremonial and religious significance for Montana Indians.  It is a place where they often gathered to pray to the Great Spirits, and to ask for spiritual guidance.  Within the park, several stone circles mark the location of Native American camps, and there is a large medicine wheel… In the hills visible on the horizon, Indians found sources of red and blue pigments for the ceremonial paints they work at the Medicine Rocks.”  The text included the black and white image above.

In 1984 I thought that this place would surely become Carter County’s first National Register nomination–that still has not been achieved.  In 2013, I also picked up a rural church and cemetery that I somehow missed 30 years earlier, the Medicine Rocks Church, which overlooks the park. The cemetery is particularly at a beautiful site. 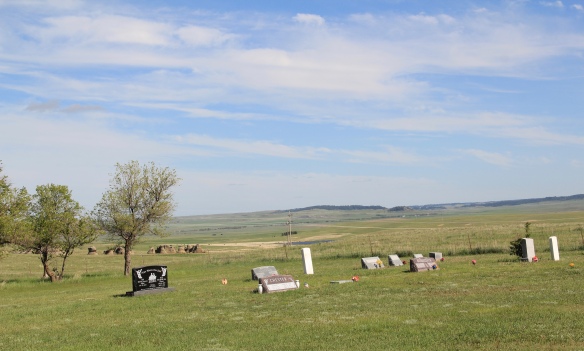 For Ekalaka itself, my 2014 post focused on public buildings such as the Carter County Courthouse and the historic elementary school.  I did not include an image of the old town

bank, which is now restored as city offices and is the first property to be listed in the National Register of Historic Places. Nor did I include the old hotel building below.

I mentioned the existence of the nursing home next to the county courthouse–an arrangement of space not seen elsewhere in the state–but did not include a photo of the c. 1960 Dahl Memorial Nursing Home. 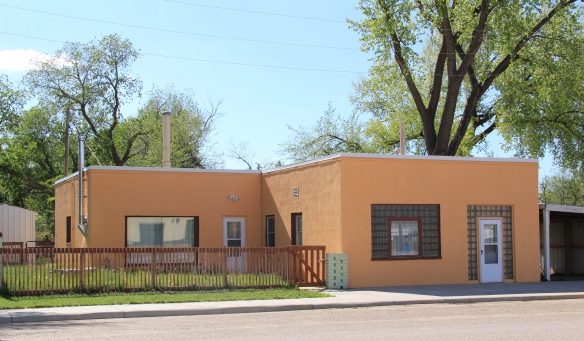 Indeed I did little with the town’s domestic architecture, even though several buildings are noteworthy, as commercial buildings become residences and then historic houses become tourist-oriented businesses, as seen above. 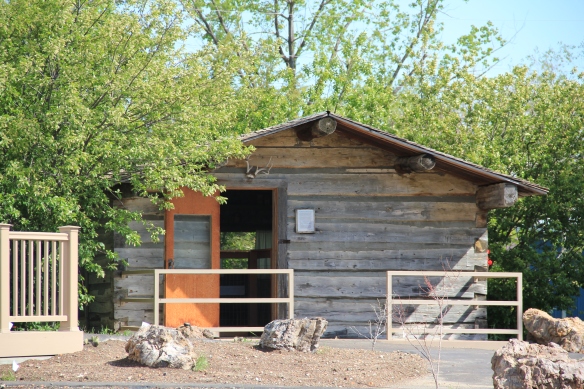 I didn’t even include all of the buildings at the excellent Carter County Museum, such as this well-crafted log residence from the early settlement period, the Allenbaugh Cabin, dated c. 1882-1883, probably the earliest surviving piece of domestic architecture in the county today.  When I visited the museum in 1984, the cabin had been acquired but it was not restored and placed for exhibit until the late 1990s.

So thanks Carole for prompting me to return to Ekalaka–a remarkably friendly place, and one where a tiny town in a wide open landscape still speaks to the roots of Montana history and culture.

My first trip to Beaverhead County in 1981 had two primary goals–and the first was to explore Bannack, the roots of Montana Territory, and one of its best connections to Civil War America. As this simple wooden sign below remarks, here in 1862 the first gold strike in what became Montana Territory occurred.

The road into Bannack passes through sparsely populated country, and you wonder what the miners, and then the families, who passed this way thought as they approached the town by foot or by horse, if they were lucky.  The “road” then of course was not more than

a path because the glistening bits of metal loose in the sands of the creek had never interested the Native Americans but news of the find was enough to drive easterners, many of them southerners, away from the landscape of war and into a wholly different place, crested by beautiful mountains. 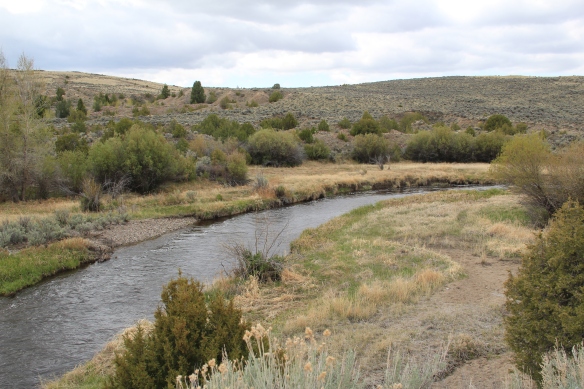 Grasshopper Creek was not much of place then, and even now, but this stream of water became the source of a boom that eventually reshaped the boundaries of the northern Rockies and nearby its banks grew the town of Bannack, a name taken in part from the Bannock Indians who had used this landscape in far different ways for many years. 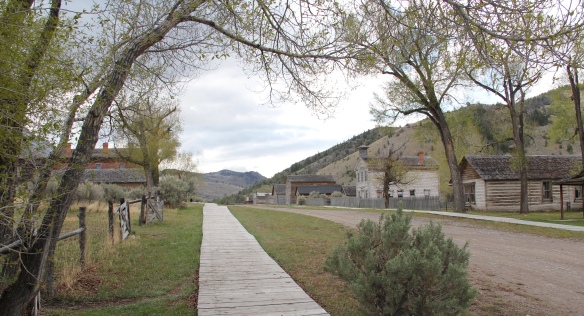 The story of the preservation of Bannock begins with local land owners, who protected the site, and kept most of the buildings from being scattered across the region.  There was little official interest in the place at first.  The state Daughters of American Revolution

marked it in 1925, otherwise the buildings remained, some in use as residences or for public purposes, others melting away in the demanding climate. The Boveys moved the Goodrich Hotel to their preservation project at Virginia City and transformed it into the Fairweather Inn, which is still in use as lodging.

The old Goodrich Hotel is not the only thing that Virginia City got from Bannack.  Bannack was the first territorial capital of Montana, but then in early 1865 the territorial offices moved to Virginia City.  Bannack’s boom had already started to decline, and the boom seemed never ending to the east in Madison County.

In 1954, the Beaverhead County Historical Society transferred about 1/3 of the present property to the state for protection and development as a state park.  Not until 1961 did the National Park Service recognize the town as a National Historic Landmark. 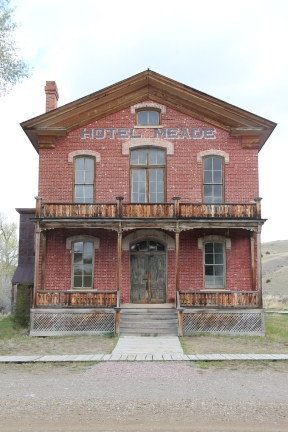 Ever since the state has repaired buildings and structures as necessary but decided long ago to preserve the town as a ghost town–last residents outside of park rangers left in the 1970s–and not to “restore” it like a Colonial Williamsburg treatment.  Thus, it is very 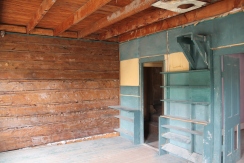 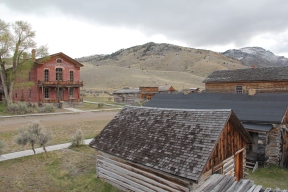 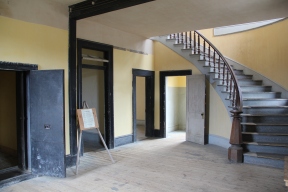 much a rough, open experience for visitors at the town.  Doors are open, nooks and crannies can be explored.  Public interpretation, outside of the small visitor center, is scant, although more than what I found in 1984, as this back room of old interpretive markers reminded me.

Gritty, dusty, forlorn:  yes, Bannack is the real deal for anyone wanting to explore ground zero of the gold rush era in Montana, and to think about how in the midst of the great Civil War, federal officials found time to support adventurous citizens to launch a new territory in forgotten expanses of the northern Rockies.

I thought that 30 years ago I “got” Bannack–there wasn’t much that I missed here.  I was wrong.  Probably like thousands of other visitors who fly into the town, and leave just as quickly, I missed what is still called the “new” town cemetery.  Almost hidden in the sagebrush along Bannack Road, the “new” cemetery is not Boot Hill–where is Plummer 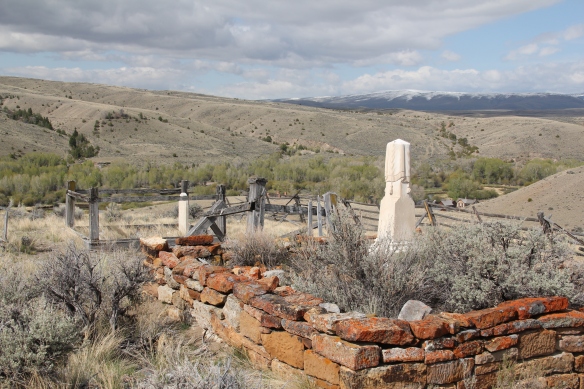 buried people still want to know–but it is a remarkable place of hand-carved tombstones, others rich with Victorian imagery, and a few that are poignant reminders of the Civil War veterans who came here and stayed. 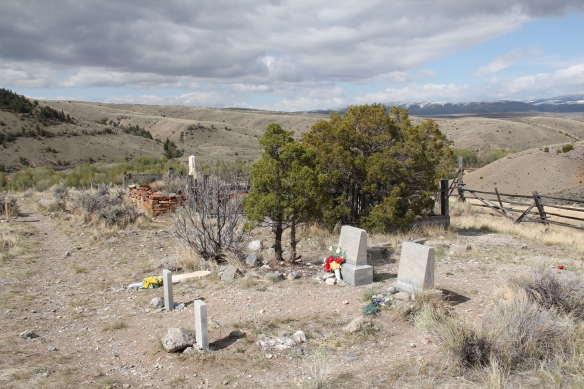 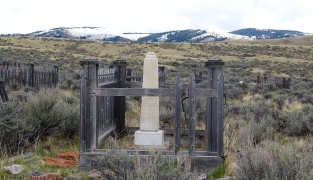 Bannack is one of the great rural cemeteries in Montana.  Don’t make my mistake from 1984–stop here and explore.