In 1982, two years before I began my survey of all 56 counties for the state historic preservation office, I took on a very meaningful and fun assignment—developing an interpretive tour of the recently restored Montana State Capitol.  Jim Mc Donald’s firm in Missoula had developed a comprehensive study nd they and the many partners and contractors restored the grand spaces of this turn of the twentieth century building.

Designed by the firm of Bell and Kent, the Capitol is a jaw-dropping public space, which spoke of the state’s dreams and ambitions at its beginning. No matter how jaded you might be about politics and politicians today just a walk through the corridors of grandeur, and power, of the Capitol will remind you that democracy does matter and we the people continue down the demanding path of making ourselves rise up to democracy’s promise.

Plus the 1982 project was just a great learning experience. I worked most closely with Jennifer Jeffries Thompson, then the education curator at the Montana Historical Society, plus it became a way to meet and learn from the SHPO staff then, led by Marcella Sherry, and the architect Lon Johnson and architectural historian Pat Bick.  Governor Ted  Schwinden and his staff were great and I always appreciated the interest shown by Senate Republican leader (and future governor) Stan Stephens.  Senator Stephens always wanted me to lead his groups through the building, but I never knew if that was because he thought I had something to say or that everyone always liked to hear me say it, with my southern accent echoing in the chambers and hallways.

I learned so much because the Capitol was full of magnificent western art depicting pivitol moments in state history, as understood by state leaders one hundred years ago.  Everyone (my celebrities included actors Clint Eastwood and Robert Duvall) wanted to see Charles M. Russell’s depiction of the Lewis and Clark expedition at Ross’s Hole in the House chamber.  My favorites however were the series of historical paintings by Edgar Paxton in the legislative lounge and office area. 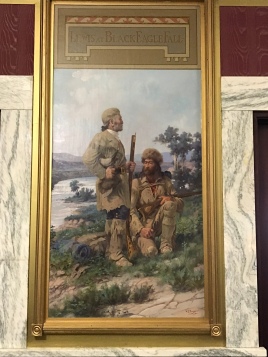 Paxson’s portrayal of Sacajawea showing the way at Three Forks—artistic license acknowledged—was always a favorite teaching opportunity for in a painting of 100 years ago Paxton depicted a reality—the presence and importance of a Native American woman and an African American slave, York—at a time when historians of the west had difficulty even acknowledging their existence in history.

I also liked the scope of Paxton’s narrative and the prominence of the Native American stor..u even to the surrender of Chief Joseph, which would have been fairly recent history when Paxton carried out his work. 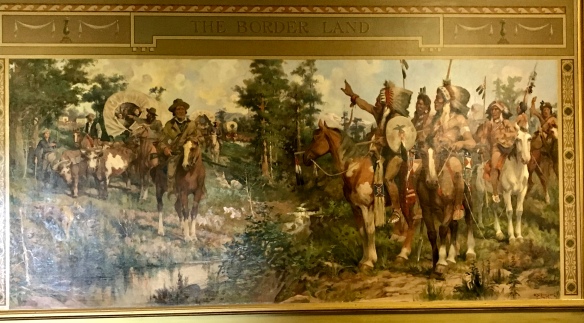 The Senate Chamber taught other stories, from the process of voting and government to the story of the three Georgians who left the South in the midst of the Civil War to find riches in Last Chance Gulch, now Helena, and on to the massive Sioux and Cheyenne victory over George Armstrong Custer’s Calvary at the Battle of Little Big Horn.

While I had stopped in at the Capitol several times in the last decade, I did not really explore. My trip this summer found many more history lessons throughout the building. 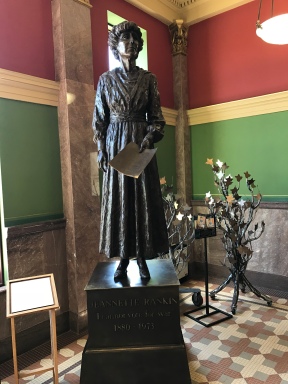 The statue of the Mansfields were an effective complement to the earlier statues for Wilbur F. Sanders  and Jeanette Rankin, which had booth stood in the Capitol when I worked there in 1882 and 1983. I also really like the bronze bell added in honor of the state’s centennial.  Both the Mansfields and the bell allow you to take visitors into Montana’s late twentieth century history.

Then the women history murals, titled Women Build Montana, are just delightful, and inspiring.  Installed in 2015 the murals by Hadley Ferguson add new layers of history and meaning to the grand old Capitol. Of course there is much more to the art and architecture of the State Capitol than what I have highlighted here. The Montana Historical Society maintains an excellent website that gives you all of the details you would ever need. But I hope that you do will visit the Capitol if you haven’t recently.  Some 36 years after I first discovered its history, art, and architecture it still has many lessons to teach.