Sweet Grass County has one of the most spectacular landscapes of the entire state of Montana.  Located in the middle of the Yellowstone Valley, the county has long been a significant crossroads, from the prehistoric era to today.  At the county seat of Big Timber, Interstate Highway 90 (along with the historic route of old U.S. Highway 10) parallels the Yellowstone River.  The town is also the southern point of origin for U.S. Highway 191,

The Lazy J, near the intersection of U.S. 191 and old U.S. 10, is a classic bit of mid-20th century roadside architecture.

which strikes northward cutting across Central Montana and continuing until the highway ends at the Canadian border, north of Malta.

Established by the Northern Pacific Railroad in 1882-1883, Big Timber has the classic T-Plan town plat found on so many Northern Pacific towns.  But one reason I have long liked this place is the quirkiness of its town plan.  The depot and the elevators are where they

should be, forming the top of the “T,” but the beautiful early 20th century stone masonry Sweet Grass County Courthouse is neither on McLeod Street (the stem of the T) nor at the end of the T, dividing the town’s commercial area from its residential neighborhood.  No, it 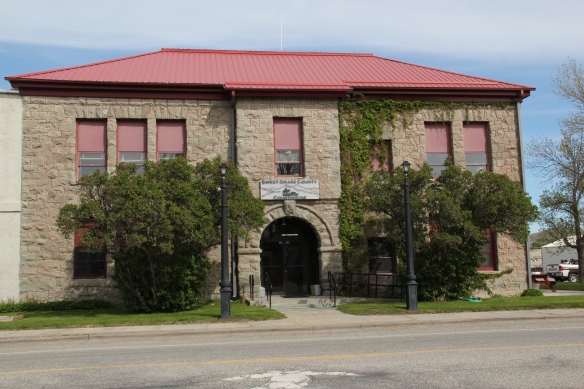 is a block west of the intersection of McLeod Street and old U.S. Highway 10–an uncommon arrangement of public space in northern plains railroad towns.  A public park

effectively marks the end of the historic town.  When I first surveyed the town in 1984, I found that an old 1946 highway marker for the Lewis and Clark Expedition had been moved to the park a year prior to my visit, and the interpretive sign told me that the town had a sense of its place in history.  In the decades since, residents have added a monument to the town’s early wool industry along with a bronze sculpture, titled “Free Spirit” by Dave Hodges, linking the place to the open spaces and cowboy culture of the valley.  Coming soon will be the new headquarters for the Montana Cowboy Hall of Fame, an institution that searched high and long for a home until finding Big Timber.

Public interpretation through art is another change I encountered in Big Timber.  The most striking dates to the Lewis and Clark Bicentennial at the start of this century.  On the walls of the local grocery store are three panels telling the story of the expedition in Sweet Grass County as the men encountered the confluence of the Boulder and Yellowstone rivers.

On another commercial building near the intersection of U.S. 191 and old U.S. 10 was an unexpected surprise:  a mural recreating–or is it reinterpreting–the famed Milwaukee Road promotional poster from the turn of the 20th century that encouraged homesteaders 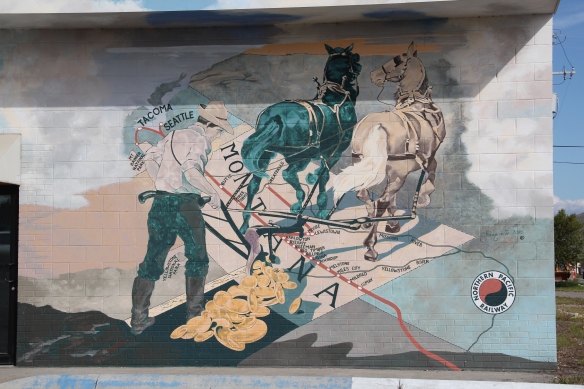 to head to Montana. Oddly the reproduction mural gives the Northern Pacific corporate emblem but the route shown is the Milwaukee’s route, admittedly also showing where the two lines ran side by side in parts of the Yellowstone Valley.

Public interpretation has not extended into an intensive involvement with the National Register of Historic Places.  In 1984, only one property–a segment of the Bozeman Trail where it crossed the Yellowstone–in the county was listed, and that stood on Sweet Grass’s far western border to Park County.  Then, right after I had finished the project, the iconic western hotel, The Grand, was listed in the National Register.  In the 30 years, a handful of Big Timber landmarks also have been designated on the National Register:  the Classical Revival-styled Carnegie Library, St. Mark’s Episcopal Church, and the Big 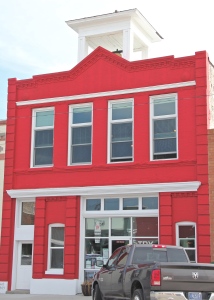 Timber City Hall.  Little doubt these landmarks are cherished–when more library space was necessary this century the expansion of the historic building was done appropriately, keeping this landmark in service for decades.

But when you consider just how intact the town’s historic environment from the 1880s to the 1950s is today, you think a National Register historic district nomination in order, or at least one for the historic commercial district, which has a wonderful array of building types, designs, and, luckily for Big Timber, open businesses, including one of my favorite bars in all of the state–at least favorite bar signs–the Timber Bar. 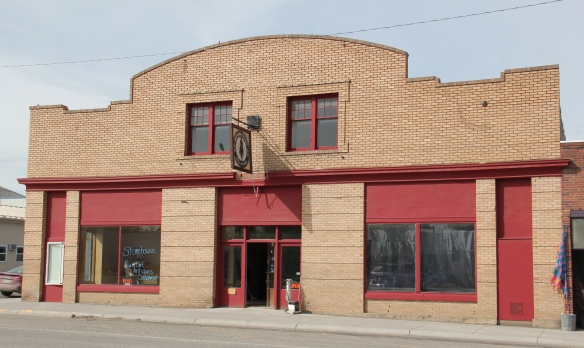 The next post will look deeper in the historic buildings of Big Timber, and then stretch north to a real jewel, the Melville Lutheran Church.