The second week of January 2018 was one of both good and bad news for historic preservation in the Big Sky Country.  First came the good news out of the State Historic Preservation Office in Helena about the National Register of Historic Places listing of two more Lake McDonald boats at Glacier National Park.  The DeSmet, shown above, has long been my favorite.  It has navigated the calm waves of the lake since 1930.  Designed and built by John Swanson of Kalispell, the boat became an important way that the increasing numbers of automobile visitors to Glacier could experience the lake and it helped make the Lake McDonald Lodge a stronger resort experience.  Quite an amazing piece of craftsmanship from Swanson, and so few of his creations remain today.  And as the photo above documents, the boat visually complements the setting–a reminder that the human presence is so small and insignificant compared to the majesty of the mountains.

The bad news also came from Northwest Montana:  the demolition of the Frank Lloyd Wright-designed Lockridge Medical Clinic in Whitefish.  Now there is no way in Montana to have a direct experience with a work from America’s best known and greatest architect. I have spoken about the preservation needs of this architectural jewel earlier in this blog–and like the loss of the Mercantile Building in Missoula last year, development pressures lacked the patience, and the vision, to see anything but a possible empty lot, where a modern “historic” take–the fake past in other words–could stand.

Such an attitude in Whitefish is doubly disappointing because in the 35 years I have visited this great mountain railroad town, the real history continues to disappear in favor of a fake, quasi-western feel past, as above. Call this progress if you will but in reality it is just another step into the abyss where Whitefish will longer be distinctive but just a place, like hundreds of others, trying to create a sense of identity and capture again what they once had. 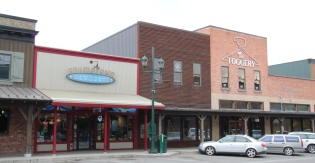 I arrived in Whitefish in May 2015 with my eyes wide open.  I had not been there since 1988, and I knew that growth had enveloped and transformed the town, with a population that doubled, lots of west coast and east coast escapees having arrived, the ski lodge business booming, and “lone eagles” having nested here for two decades.  The phrase

“lone eagles” was local–an attempt to describe those professionals “who fly to work as comfortably as most Americans drive, and whose use of computers in business lets them indulge their preference for life in the great outdoors,” as a June 19, 1994 story in the New York Times explained.

During my 1984-1985 survey for the state historic preservation plan, everyone probably tired of me touting the wonders of Whitefish, especially its mid-1920s Arts and Crafts/Chalet-styled Great Northern passenger depot and offices, designed by the railroad’s Thomas McMahon.  If any building needed to be added to the National Register of Historic Places, it was this one, and not just for its impressive architectural statement. 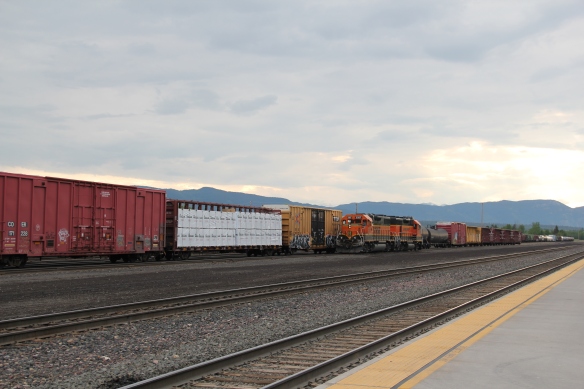 The station along with the railroad tracks defined everything you saw in Whitefish–here in the classic Great Northern T-plan landscape was a classic railroad town–one that old-timers even called the best along the entire line.  Whitefish developed and then prospered as a division point on the mainline from 1904 to 1955–and that corporate imprint was still there to be experienced, in 1984.

Thankfully in 2015, I still found all of my favorite landmarks from 30 years earlier, even though there was little doubt that the business district had been altered, sometimes in ways that left little original fabric in place but still some two-story brick blocks stood. 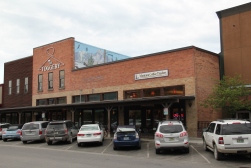 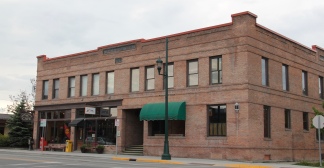 The Buffalo Cafe remained in business–a mainstay when I worked in the region in the 1980s as was the Palace Bar right around the corner.  The Palace dated to c. 1915 and has a wonderful dark wood carved bar from that time–it began as a brewing company and has remained that throughout all of the recent changes.

The town still had its historic residential neighborhoods at the foot of Main Street and then both to the east and west. comprising one of the state’s best collections of bungalows, often found in railroad towns of the early 20th century. 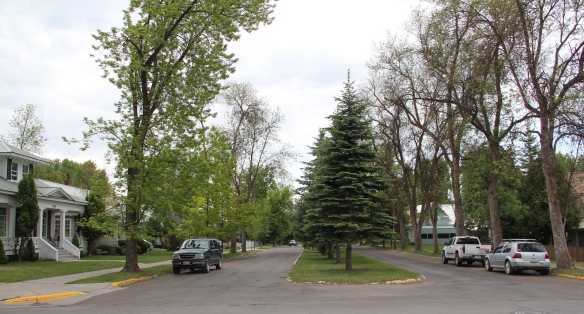 Perhaps more importantly it still retained some of its distinctive domestic architecture–the railroad tie house (a log house made of railroad ties) and a row of shotgun houses for railroad workers.  To all architectural historians who believe that the “shotgun” house is purely a southern thing–look closely:  these houses were built quickly and cheaply to serve industrial laborers and can be found throughout the country.

Whitefish’s historic Lockridge medical center (1958) designed by Frank Lloyd Wright remains a distinctive modernist landmark within the business district, although now it houses professional offices.  It was listed in the National Register in 2012.

A much earlier landmark, the Classical Revival Masonic Temple from the town’s first decade still stood, and it too found a new use through adaptive reuse.

Despite the population boom over the last 30 years, Whitefish still uses its Art Deco-styled school from the New Deal decade of the 1930s, although the auditorium has been restored and updated into a community performing arts center.

Certainly my favorite landmark was the Great Northern Railway station, which provided passenger service on the first floor and administrative offices on the second floor.  In the last 30 years, the town has significantly enhanced the setting with a city park, various statues and interpretive signage, along with a historic bus that once moved passengers to Kalispell and environs and historic railroad engines. 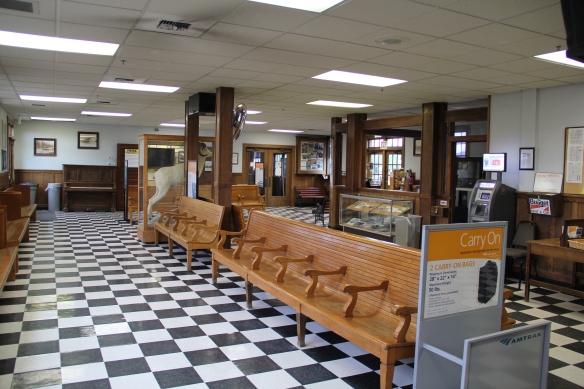 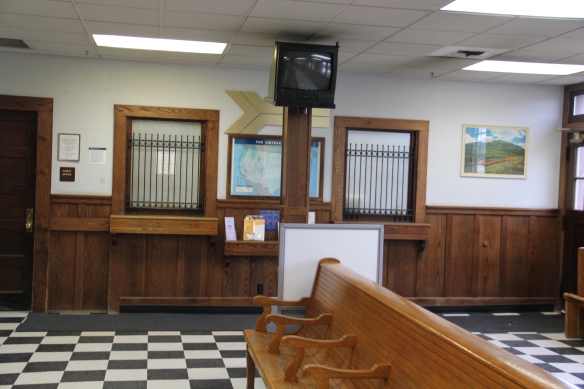 The enhanced railroad station is clearly interested in drawing the attention of travelers who stop here for the nearby ski lodges or for a quick stop before entering Glacier National Park.  It is viewed as the town’s center point, its primary attraction–which is as it should be because there are few more compelling Great Northern Railway towns than Whitefish.