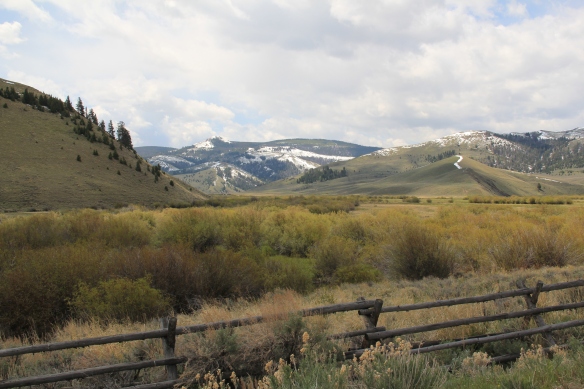 Beaverhead County’s history has deep roots, perhaps never deeper than at the high mountain passes that divide it from neighboring Idaho.  We have already taken a look at Monida Pass, but now let’s shift to the western border and consider Lemhi Pass (Lemhi Road is the image above) and Bannock Pass, both at well over 7000 feet in elevation. 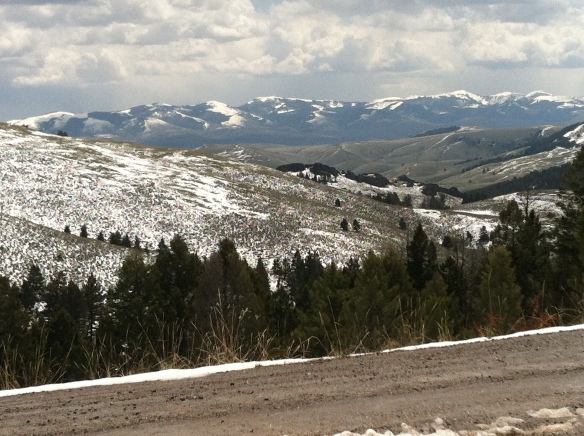 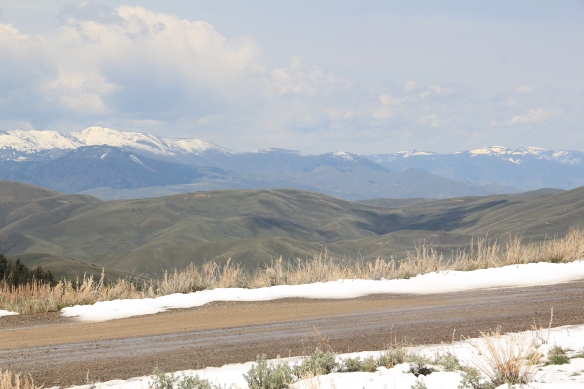 Lemhi Pass is a magnificent place, reached by a wide dirt road that climbs up to 7300 feet.  The roadbed is modern, and lies over a path worn by centuries of Native Americans who traveled this path between mountain valleys in present-day Montana and Idaho.  That deep past is why the more famous Lewis and Clark Expedition took this route over the Bitterroot–and the Corps of Discovery connection is why the pass has been protected in the 20th century.  The pass is also connected with Sacajawea, since her tribe, the Shoshone, often used it to cross the mountains.

The pass is one of the infrequently visited jewels of the Lewis and Clark National Historic Trail, a place that the expedition used and probably would have never “discovered” if not for the prior Native American use.

This kiosk by the U.S. Forest Service is part of the new public interpretation of the property, both at the start of the pass to the top of the mountain itself at the Sacajawea Memorial Area.

Bannock Pass, comparatively has received little in public interpretation.  Unlike Lemhi, it is not a National Historic Landmark associated with Lewis and Clark.  For today’s travelers, however, it is a much more frequently used way to cross the Rockies despite its 300 foot higher elevation.  A historic site directional sign leads to one interpretive 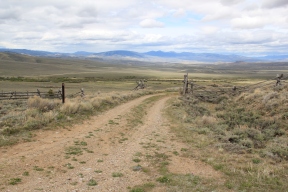 marker explains that railroad engineers used the pass to connect Dillon and Idaho in the early 20th century, changing the ancient appearance of the pass, used by Native Americans for centuries to connect the high plains of Montana to the rich valleys of Idaho.  The marker also describes the use of Bannock Pass by Nez Perce led by Chief Joseph in 1877, as they escaped back into Idaho after the Battle of Big Hole. The Nez Perce National Historic Trail is more closely associated with Chief Joseph Pass, located to the north.

It was a snowy Memorial Day when I crossed Lost Trail and Chief Joseph passes on my way to Big Hole Battlefield.  Once again I was impressed by the recent efforts of the U.S. Forest Service to interpret the epic yet tragic journey of Chief Joseph and the Nez Perce in 1877, especially the Trail Creek Road that parallels Montana Highway 43.

Kudos to the National Park Service for its new visitor center, exhibits, and interpretive markers at the battlefield–the finally the whole story of the Nez Perce campaign is explored through thoughtful public interpretation, centered on the Nez Perce perspective,

those who lived here until the military force led by Col. John Gibbon thought it could surprise and rout the Indians.  Rather the Nez Perce counter-attacked forcing the soldiers into surrounding woods.  The trek of Chief Joseph and the Nez Perce effort to find safety in

Canada was underway. Today the Nez Perce National Historic Trail and Park mark that journey into history. The park today is frankly an amazing transformation, from a preserved battlefield in the early 1980s that only hinted at the true facts of history to a modern of battlefield interpretation, one that does justice to history and to the Nez Perce story.  One only wishes that more western battlefields received similar treatment.