OK Ranch outside of Wisdom

The Big Hole Valley of Beaverhead County is wide, expansive, challenging, and cattle country without par in Montana, and has been so for over 100 years. Livestock means hay and just outside of Wisdom is a beaverslide haystacker. These wooden pole and plank devises originated in the Big Hole Valley in the early 1900s and can be found in other 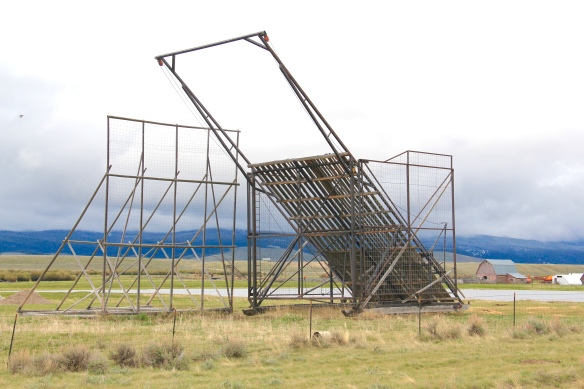 prosperous valleys of western Montana.  Their purpose was simple–to stack huge piles of hay, sometimes reaching 30 feet in height, that would be left in place, in the open.  In the western Montana climate, there naturally would be some waste, but enough hay would remain usable to keep a ranch well supplied for 4-5 years. 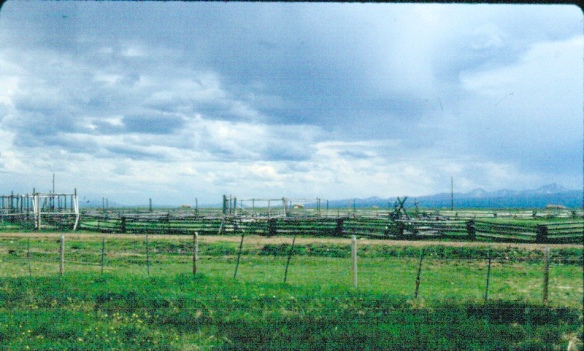 The Big Hole Valley was a place of interest to me in 1984, noted by the image above, for how ranches used logs to build the physical infrastructure–the log snake fences, the gates, the log barns and other ranch structures–of their properties. 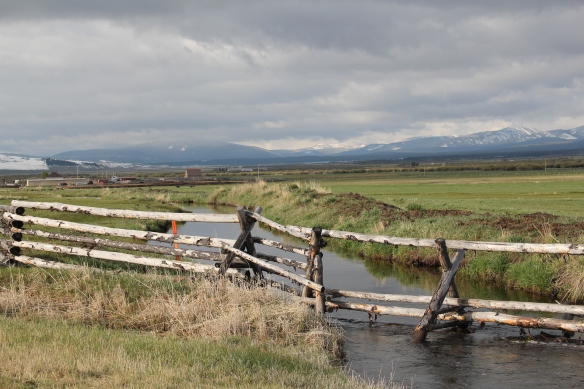 What I didn’t give as much attention to, already commented on in this blog at numerous places, are the irrigation ditches, a more consistent supply of water that allowed ranchers to expand production.

Public interpretation of the ranching landscape was, not unexpectedly, meager back in the day.  This sign made by the local VFW post 3040 called the valley the “land of 10,000 haystacks.”  Wonderful ranching techniques had lessened the number of haystacks and haystackers found through the valley, but still some remain of the old tradition.

State officials have worked with local ranchers to give travelers places to stop and consider the depth and wealth of the landscape before them.  Below are views of the Carroll Ranch, an early Big Hole Pass ranch that is now part of the larger Hamilton Ranch.

There are several interpretive signs to tell the story of the Hamilton Ranch, which encompasses several historic buildings, and wonderful views of the valley.

Then a separate marker explains the beaverslide haystacker, placed at the pull-off on Montana Highway 278, giving travelers one of their best opportunities to look at one up close (there is also one in the Deer Lodge Valley at the Grant-Kohrs National Historic Site.)

The Big Hole Valley may no longer be the land of 10,000 hay stacks but it still is a working landscape of ranch families, building new traditions as they also conserve past ways and landscapes in Montana. 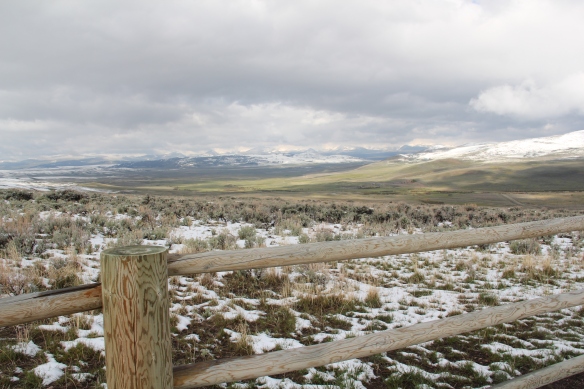 Beaverhead County, named for the prominent, ancient landmark on the Beaverhead River at the corner of Madison and Beaverhead county, was the first rural place I visited in Montana after my arrival in Helena in 1981.  Why?  No pressing reason, except that the place name of Wisdom called out to me.

Our first stop was at Fetty’s, a classic Montana bar that friends tell me burned a few years ago.  In its place now stands The Crossing at Fetty’s, also a good place but a bit more upscale than the old c. 1930s bar/cafe.  The new place wasn’t the only change in Wisdom.  There was a new public school building and a new post office.

These were just the first of the changes since 1982. Wisdom is still the tiny homesteading era town that I recalled.  Key community landmarks remain: witness the two-story Craftsman-style Masonic Hall and Gothic-styled church building.

The town’s large community hall remains in constant use.  The separate Women’s Club

building once welcomed ranch wives and daughters to town, giving them a place to rest and providing a small library of books.  It has been converted into a small lodge for skiers and hunters–a great small town example of adaptive reuse.

Of course the major landmark for travelers through Wisdom in the late 20th century was Conover’s Trading Post, a two-story false front building–clearly the most photographed place in town, and inside a classic western gun and recreation shop.

But the Conover’s facade, even the name, is no more.  Not long after my 2012 visit to Wisdom, new owners totally remade the building and business, opening a new store named Hook and Horn. 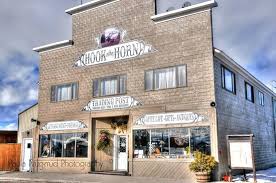 One significant property I sought out in 2012 was the town cemetery, a resource type that I had ignored almost totally across Montana in the initial state historic preservation plan work.  The cemetery marks the town’s height of population during the early twentieth century, and contains several interesting grave markers, including the headstone for Frederick Finsley, a veteran of the Civil War who served in a Union regiment from West Virginia, and the cast metal obelisk for  the Gallen family. 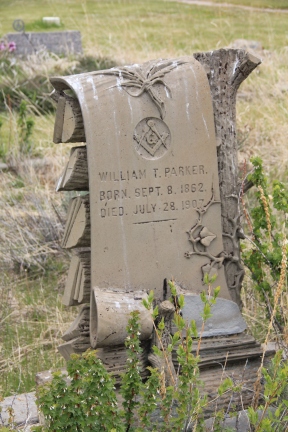 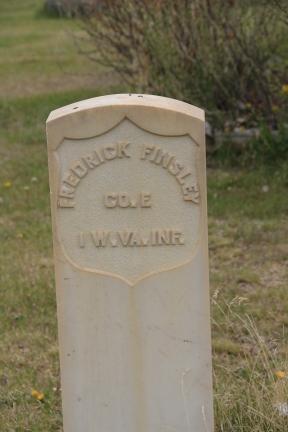 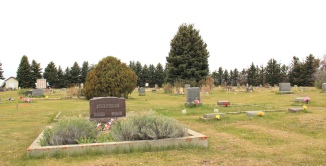 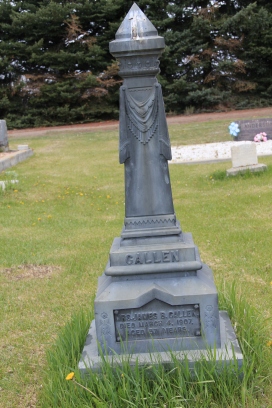 Wisdom was where I started my exploration into Montana over 30 years ago.  But, surprisingly, during the 1984-1985 state historic preservation plan work I sorta glossed over Beaverhead County, and didn’t spend the time there that I should have.  In my new work I was determined not to repeat that mistake and have spent four long days in the county, exploring well known historic places (Big Hole National Battlefield, Bannock State Park) and even more time at the not so well known.  In the next posts I want to consider the diverse types of landscapes that make up this county, from ranching to mining to railroad towns to river towns to special Native American landscapes.

Montana celebrates the sesquicentennial of Montana Territory in 2014.  This week the Montana Historical Society announced that one of its key themes would be women’s history and then pinpointed key individuals and places, including the East Glacier Women’s Club.  I could not agree more that new attention needs to be given to community institutions, established by and operated for women.  In my 1984-85 work on the Montana historic preservation plan, I did not ignore women’s clubs–the Deer Lodge club house, an attractive Bungalow from 1904 was included in the survey–but I did not systematically look for these buildings and think about what they meant to local women and to the community at large.

The General Federation of Women’s Clubs in Montana organized that same year, 1904, and the federation’s magazine, The Montana Woman, is a great way to trace the creation and expansion of clubs across the state, from the major cities to places as small as Sula in the southwest corner of Montana.  Once you make a commitment to locate extant historic club buildings, you find a range of building types. 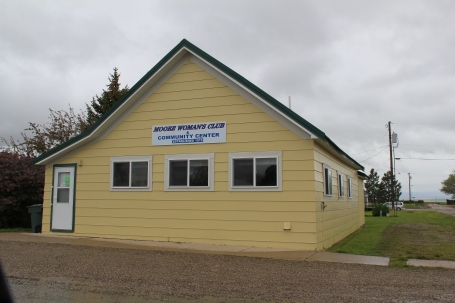 The Moore Woman’s Club and Community Center in Fergus County dates to 1915, and so many existing rural club buildings belong to that decade of the homesteading boom of the early 20th century. In 2012 I spent two days is Wisdom, where the old woman’s club building of the 1910s has been converted into a lodge, one of the best examples I have encountered in rural America of finding a new, effective use for a community building.

The Wisdom club house is a small frame building, seemingly too small to be a community building but when placed into the overall context of the emerging built environment of the homesteading landscape, it was a substantial building–compared to the typical homesteading tar-paper shack.

Women’s organizations also proved adept at adapting older buildings for their use. The Coalwood Ladies Aid Society, established 1915 in Powder River County north of Broadus, meets at the Coalwood School, built c. 1945.  A small rural population does not deter 21st century Montana club women from keeping the institution alive, witness the earlier post on the Wise River Women’s Club, dated to 1958, but with a recent expansion of the club house/community building. 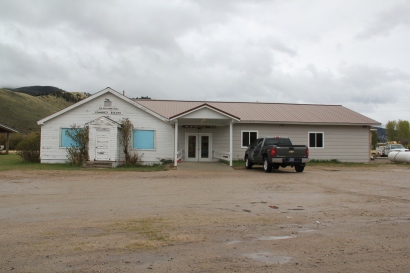 One of my favorite club buildings in eastern Montana is a striking Rustic-styled clubhouse in Malta, Phillips County.

The Malta Woman’s Club organized in 1903 but the clubhouse dates to the New Deal era of 1937. Construction of the building was part of a $40,000 Works Progress Administration project in Malta that included the construction of a new city hall, a resettlement administration building, and a “ladies community center.”  (Phillips County News, January 24, 2001). As in other Montana towns, the clubhouse served as a town’s de facto library, using books donated by club members, and the club undertook such community improvement projects as erecting a fence around the Malta cemetery and supporting the town’s first blood mobile.

There’s more to come in this discussion of women’s club and Montana’s landscape, but this initial post certainly agrees with the MHS announcement that there’s a big, significant women’s history story to be found in the Treasure State–club buildings are a good place to start.