One of the most significant developments in Montana historic preservation has been the verified location of “Travelers Rest,” outside of Lolo in Missoula County.  Here is where the Lewis and Clark Expedition camped along Lolo Creek in 1805. During my state historic preservation plan work of 1984-1985, we agreed on the general location–the property had been listed in the National Register of Historic Places and designated as a National Historic Landmark for years.  In fact, as indicated in the marker above, the Daughters of the American Revolution had also marked the place as early as 1925.  But one was convinced that the campsite had been definitely located. Not until archaeology in 2002 had the actual campsite been proven, and by the time I visited Missoula County in 2006 I happened to arrive on the day a celebration for the new Travelers Rest State Park was underway. The park was not yet finished but the Travelers’ Rest Preservation and Heritage Association wanted to host an event during the Lewis and Clark bicentennial period.  It was exciting to see the launch of this new, important historic site not only for Missoula County but the state and nation as a whole.

Move forward almost ten years to the completed Travelers Rest State Park.  It is one of the best interpreted sites along the entire length of the Lewis and Clark National Historic Trail. It doesn’t have grand monuments–but it does have a walking trail that gives you different vantage points on the camp site.  Although not far from U. S. Highway 12, it is quiet, peaceful, and you can imagine what the expedition members thought about this landscape some 200 years ago.

The interpretive markers do not overwhelm the site.  But by text and illustration, along with use of primary documents, the markers tell an inclusive story, one that draws you into the landscape by reminding you that generations of Salish, Pend d’Oreille and Nez Perce people used these resources long before Lewis and Clark arrived in the fall 1805. 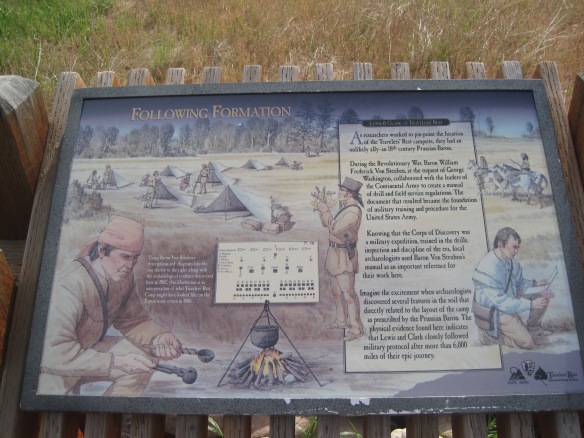 Since I last visited in 2012 efforts have been underway to secure additional acres and to preserve a buffer around the property since growth and highway expansion between Missoula and Stevensville has engulfed Lolo.  The park now has 51 acres and represents quite an achievement by the non-profit Travelers Rest Preservation and Heritage Association, local government, and Montana State Parks.