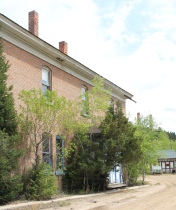 occurred, creating one and two-story brick buildings with dazzling Eastlake-styled cast-iron facades. The town was incorporated in 1890. 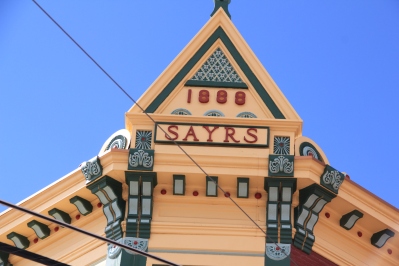 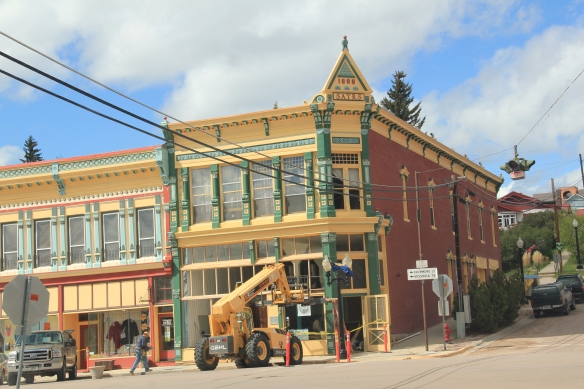 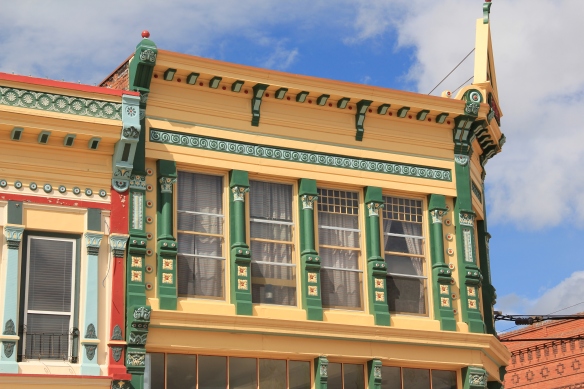 The quality of the Victorian commercial architecture still extant in Phillipsburg, such as the 1888 Sayrs Block above, astounded me during the 1984-85 preservation work. So much was intact but so much needed help. Residents, local officials, and the state preservation office understood that and by 1986 the Philipsburg Commercial historic district had been added to the National Register of Historic Places. 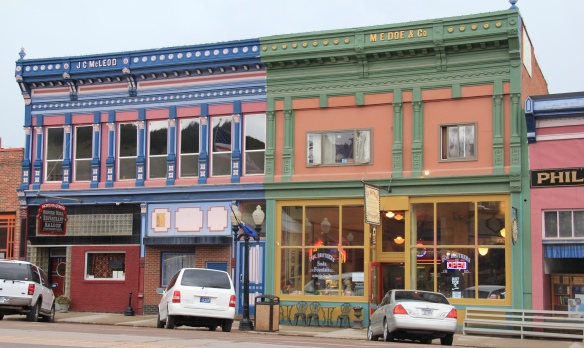 What is exciting is that in this decade, entrepreneurs are building upon early successful renovations and adaptive reuse project to launch new businesses and create new jobs. The town’s population is growing, after 30 years of decline.

No business has been more central to this transformation than the Sweet Palace, shown above, which is next door to the two-story brick Masonic Lodge. 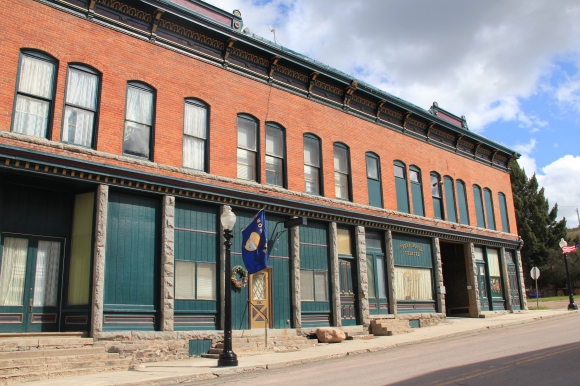 Another key to recent success has the resurrection of local hotels and bed and breakfast establishments, along with the staging of various summer productions at the town’s Opera House Theatre, built in 1896, making it the longest continuous operating theater in the state. These properties give visitors a reason to stay longer, and not just stop at the Candy Store, grab a brew at one of the town’s historic bars, and then move along.

The town has recently added an amphitheater, located behind the historic school building, that also serves summer events that drive ever-increasing numbers of people to visit this mountain mining town and to spend more time and money there. This is modern-day heritage development at work. 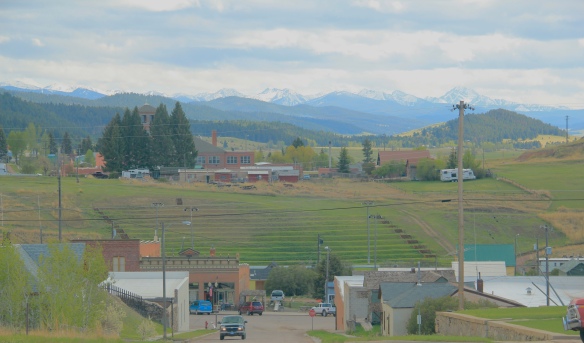 The new developments in Philipsburg are interesting and invaluable changes since 1984-1985. At the same time, I am happy that residents have still embraced their historic public buildings in a similar fashion.  The photograph I used in my book about the town in 1985 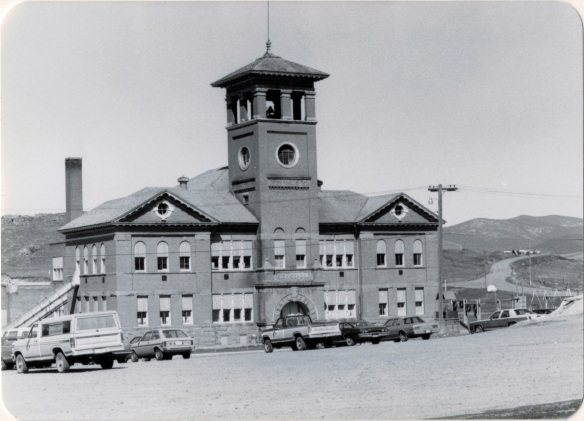 was the Philipsburg School, with its soaring tower symbolizing the hopes that residents had for Philipsburg’s future in the 1890s. The historic school, which is listed in the National Register, remains although the community built a new building adjacent to the historic one in 1987. (you can see a corner of the new building at the lower left). 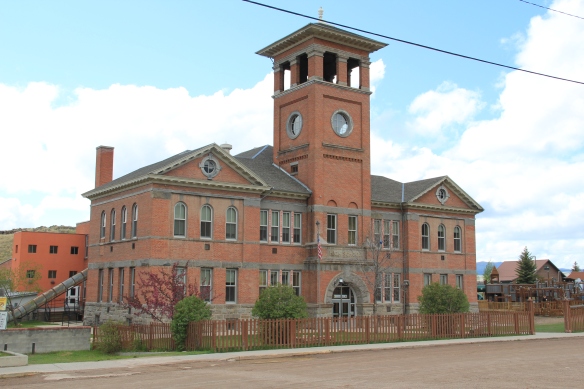 When I first visited in 1984 the only building in Philipsburg listed in the National Register was the Queen Anne-styled Granite County Jail of 1902.  It also remains in use.

But now the Classical Revival-styled Granite County Courthouse (1913) is also listed in the National Register.  Designed by the important Montana architectural firm of Link and Haire, this small town county courthouse also speaks to the county’s early 20th century ambitions, with its stately classical columned portico and its central classical cupola. 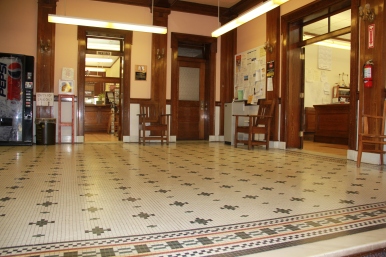 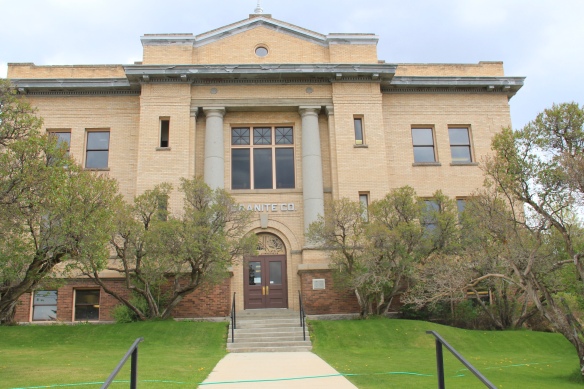 By climbing the hill above the courthouse you also gain a great overview look of the town, reminding you that these rather imposing public buildings are within what is truly a modest urban setting that is connected to the wider world by Montana Highway 1.

A couple of final thoughts on Philipsburg.  Its range of domestic architecture from c. 1875 to 1925 is limited in numbers but impressive in the variety of forms, from brick cottages to brick Queen Anne homes to textbook examples of bungalows and American Four Squares.

Listed in the National Register of Historic Places, the M.E. Dow House is a frame Queen Anne home, modest considering the flamboyant Eastlake-styled cast-iron front to his downtown business block.

The Philipsburg Cemetery, which like so many that I ignored in 1984-1985, was a revelation, reflecting the quality of Victorian period architecture found in the town. 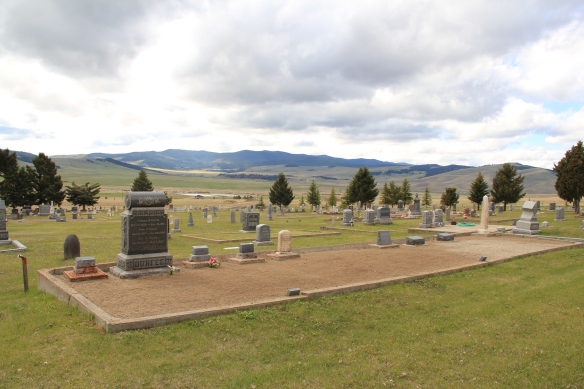 The beauty and serenity of its setting were impressive enough, but then some of the family plots and individual markers reflected Victorian era mortuary art at its best.

This cast-iron gate, completed with urns on each post and the music lyre gate, is among the most impressive I have encountered in any small town across America.  And this cemetery has two separate ones. 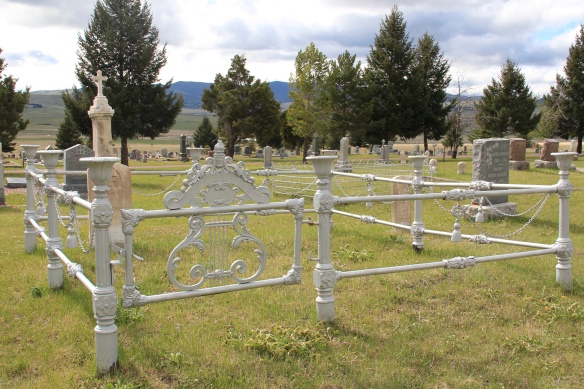 Many grave markers came from local or nearby masons but others, like these for the Schuh and Jennings families, were cast in metal, imitating stone, and shipped by railroad to Philipsburg. 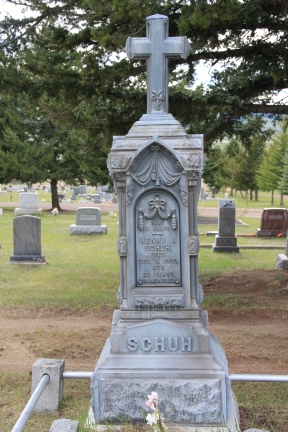 Other markers are not architecturally impressive but they tell stories, such as the one below, for Mr. George M. Blum, a native of Germany, who was “killed in runaway at Phillipsburg” in 1903. I look forward to a future visit to this cemetery for further research.

The late 19th century discovery and development of silver mines high in the Granite Mountains changed the course of this part of the Pintler route.  The Granite Mountain mines yielded one of the biggest silver strikes in all of Montana, creating both the mountain mining town of Granite and a bit farther down on the mountain’s edge the town of Philipsburg, which by 1893 served as the seat for the new county of Granite.

The U.S. Forest Service’s rather weathered and beat-up sign marks the historic entrance to the mining town of Granite, located at over 7,000 feet in elevation above the town of Philipsburg.  During the 1984-85 state historic preservation plan work Granite was the focal point.  The office knew of the latest collapse of Miners Union Hall (1890) turning what had been an impressive Victorian landmark into a place with three walls and lots of rubble–it remains that way today. 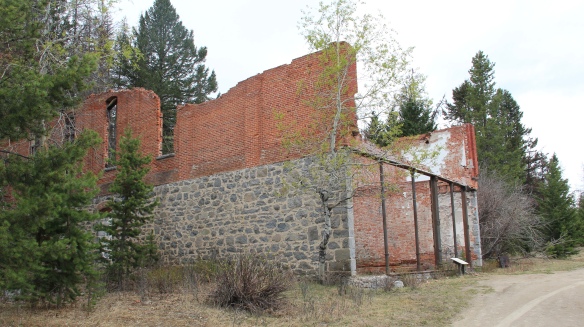 Miners Union Hall was one of two National Register landmarks in Granite.  The other was the massive stone Superintendent’s House, which Montana State Parks has stabilized, adding hopefully decades to its life, but so much else of the town is nothing but a historical archaeological site, a fate held by the old bank, Catholic Church, the California House, and a score of other significant buildings. 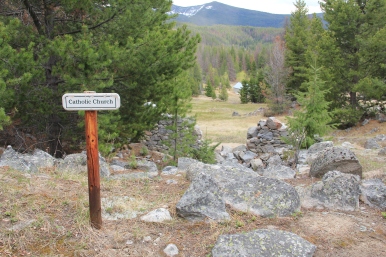 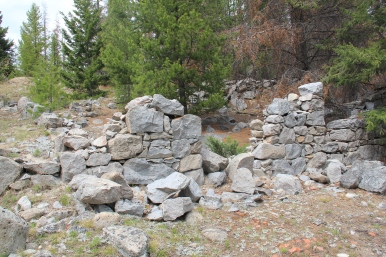 The drive to Granite can be harrowing for the novice but affords great scenic views of the mountains plus multiple deteriorating mining sites.

Connecting the Granite road to the town of Philipsburg, today as in the past, is the site of the Bi-Metallic Mill, which is still in limited use today compared to the mining hey-day. 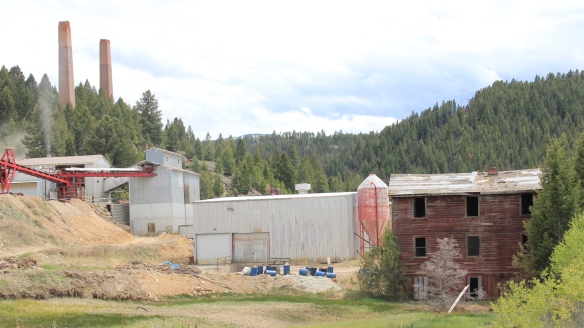 The mines around Philipsburg are not as important as they were during my early 1980s visits, and population began to drop from the steady number of approximately 1100 the town had held for decades to just over 800 by 2010.  But in this decade, population is growing again, and historic preservation and heritage tourism are playing key roles in the revival of fortunes, as the next post will explore.