When I arrived in Montana, fresh from Colonial Williamsburg, the state’s early history–the Native American story, the arrival of traders, first the French, then Lewis and Clark, and after that David Thompson out of Canada and the American Fur Company out of St. Louis–captured my attention.  Later came Catholic missionaries, who struck particularly deep roots in the western valleys.  All of those cultures, all of those conflicting needs, views, perceptions–it fascinated me, and those places of interaction and conflict became some of the focal points of my work. Thus, Stevensville was a place I eagerly explored.

I had my own copy of the lithograph above, a depiction of the Owen complex and “fort” from a federal survey expedition of the 1850s.  So I first went to see Fort Owen State Monument. 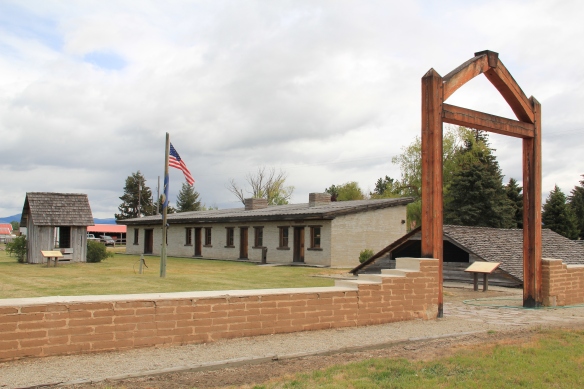 Much to my surprise I found a “pocket” park, set almost like you will find historic sites within major cities, except here the site is next to a working ranch.  Not what I expected.

But no complaints either.  We are lucky that the ranchers shared a bit of the ranch and preserved some of the site’s history, especially the one remaining adobe barracks since this type of building and method of construction is so rare to find today. Most western forts are nothing more than archaeological sites.

The barracks has much to say but public interpretation here has not improved to the degree found at several other state parks in Montana like at First Nations in Cascade County.  We get enough of the story to tantalize the average visitor and perhaps confound the scholar who wants more context.

The turn of the 20th century historic photo above shows how much was still here about 100 years ago but a storm ripped the roof off one of the barracks, and after all the construction Owen used here over 150 years ago was never meant to last for long.  Traders wished to make an outpost impressive–why would anyone trade with a business that lacked substance?–but it made no business sense to build anything grandiose. 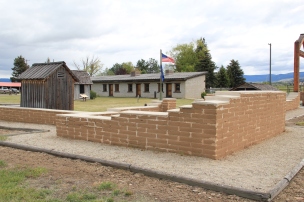 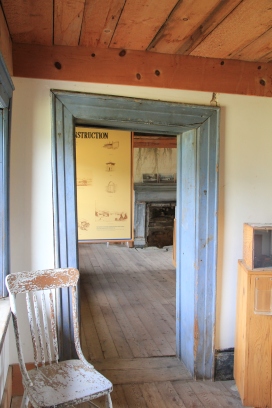 To be clear–time had not turned still at Fort Owen since my last visit in 1984.  You can see good conservation work everywhere and new exhibit cases improve the public presentation.  But you still leave wanting more, and more land would be a start.  You worry 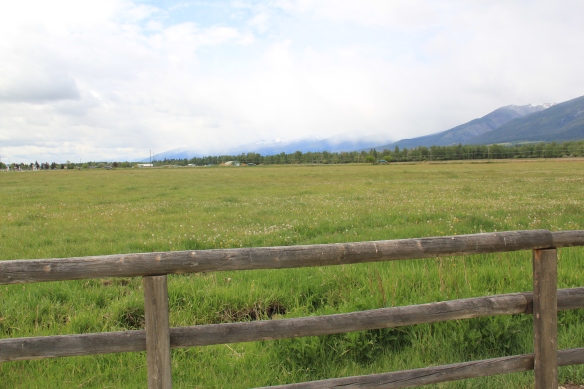 that the open views to the greater landscape which remain as they were in the past might not last in the rapidly suburbanizing upper Bitterroot Valley. The Fort Owen park is still an invaluable national story set within a working ranch–but what if it becomes a pocket park surrounded by a 21st century suburb? The chance for meaningful archaeology–not to

rebuild the fort as what has happened at its cousins in Fort Benton and Fort Union–but to understand much more about the formative period of Montana history: that could be lost forever. 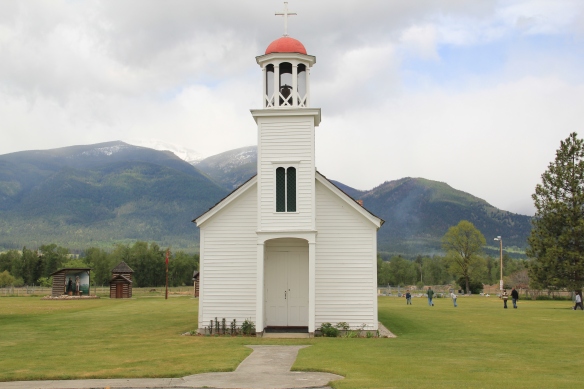 Luckily at St. Mary’s Mission enough land has been secured that even as Stevensville expands (its population has jumped over 50% since 1984), perhaps the historic site’s future will not be that of a pocket park. 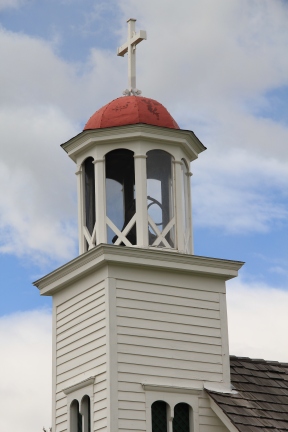 Catholic missionaries led by Father DeSmet established the church here by 1841, although the present log chapel and attached school dates a generation later.  This is still one of the state’s oldest buildings.  The historic church is the setting for a largely memorial landscape honoring the priests, key Indian leaders such as Charlo, and those who set out

to create Christian outreach to the Native Americans, then and today.  While the public interpretation here is robust, it is rarely a dialogue but more like a sermon, always on message, about the values the priests brought.  What the Salish and other tribes thought about it all–from their perspective and in their words or traditions–is rarely given much attention.  Yet the place itself, the setting, the use of logs, surviving furniture brought to the property in the 19th century:  it all can say quite a bit if you stop and look and think. 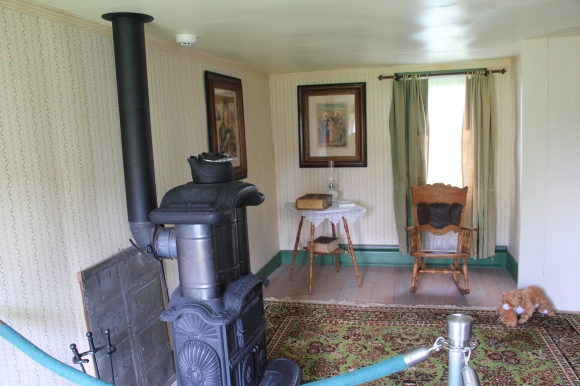 St. Mary’s is powerful–in the same way that St. Peter’s Mission in Cascade County can be powerful–in how it juxtaposes the faith of the missionaries against the realities of the surrounding culture and landscape.  Especially when you step into the historic cemetery 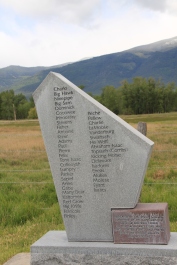 and look beyond the grave markers and memorial into the built environment and surrounding natural setting, St. Mary’s can imprint you in a profound way.

Let’s hope that future development in and around the historic mission keep these vistas as they are–for it is here that the modern story of the Bitterroot–meaning the last 175 years–begins.