The National Trust for Historic Places has named the category of rural schoolhouses of Montana as one of its 11 most endangered places in the United States.  This designation could not have come at a better time for as I traveled extensively in eastern Montana in the second half of May I noted the number of missing schools, or those needing repair.  Let’s trust that this national designation, and publicity, will help free up resources for the adaptive reuse and preservation of these special places.

Since the National Trust wisely put a spotlight on Montana’s rural schools, I will explore the topic in a series of posts over the next weeks.  Certainly there are many abandoned schools needing help.  Then again many property owners have found new uses for the buildings and still other communities have moved schools into museum settings, or in rare cases preserved them at the original location, and interpret the ways of early 20th century education for those of the 21st century.

Dell School, Beaverhead County.  It was converted into a cafe near I-15, which was a great breakfast place in 1984 and remains a great place for just about anything today.

Let me start with a brief essay I prepared for the Summer 1985 issue of Montana: The Magazine of Western History titled “Rural Schoolhouses in Montana.”  At the beginning, I observed: “Rural and small-town schools are important components of the Montana landscape and deserve our special attention.  Whether they are located at county crossroads, along dusty lanes, or in the midst of rural villages, these buildings remind us of how, as children, we once looked at the school as the most imposing structure in our lives, a place of concealed terrors and infinite wonders.  Within the schoolhouse, children of different backgrounds and ages established the shared purpose and neighborliness that are crucial to a rural community’s survival.”

“For a moment, cast aside your romantic attachments to schoolhouses and think about Montana’s schools as historical documents.  These buildings, considered in the aggregate and in the context of the regional landscape, have important things to tell us about our history.” 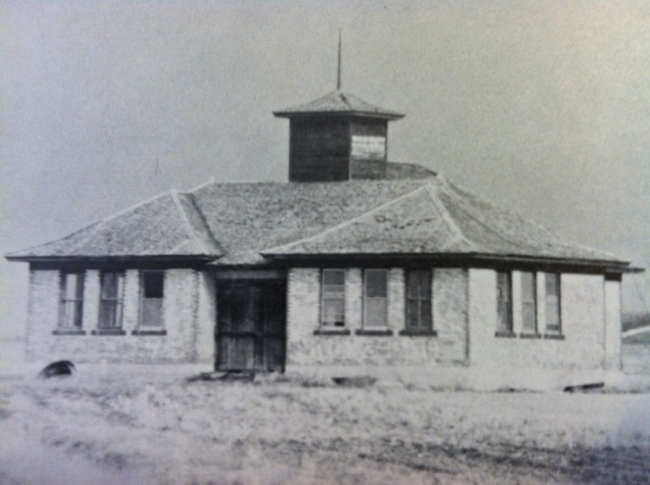 The article highlighted five schools.  The Benchland school in Judith Basin County was a major $5000 investment in 1911 for a just established community but leaders wanted a brick school to show that they were serious and would be there for the long haul.  Benchland hoped to grow as a major village along the Billings and Northern branch line, but prosperity never happened, and the community had too much school for its size.  It was a barn in fair condition in 1984; almost 30 years later it needs help as its roof is nearing collapse.

Another school highlighted in the 1985 article was Vananda School in Rosebud County, a village which then was a ghost town along the recently abandoned Milwaukee Road.

Here was an even more evocative landmark of community dreams from the early 20th century.  The school dates to 1925, with “its tall physical presence on the flat, treeless prairie dominating much of the northern Rosebud County landscape.”  Over the 30 years since I made sure to periodically roar by Vananda as I returned to Billings for flights back to Tennessee.  I did not want to see this landmark of the homesteading era disappear.  As I concluded the 1985 essay:  “As monuments to town boosterism, as records of homesteader mobility, and as social centers, Montana’s schools physically link us to our roots as a community and a culture.”  The Vananda school remains empty today, but it still says much.