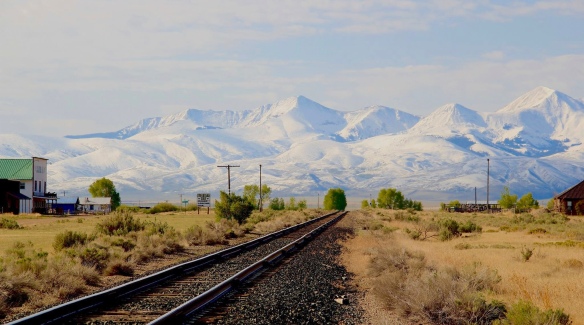 There’s been a bit of winter in Tennessee in early January 2018 and my university has been closed for two days due to three inches of snow (that’s no misprint). Days like this one lead me to reflection of my jaunt across Big Sky Country in the cold of February to the warmth of mid-May 1984. I had spent 2 months at my cubbyhole in the basement of the Montana Historical Society, shown below, and I was ready I

thought to hit the road. Wonders of all sorts I would find and here are just a few of the special (admittedly perhaps not spectacular to outsiders) places I encountered.

Just up the tracks from the opening image at the southern tip of Beaverhead County was the Hotel Metlen in Dillon. A grad student recently asked me about it, having come across it while trolling the internet. It sounds like a fleabag the student remarked–I probably didn’t help when I recalled staying there for 10 bucks in 1984. But what a great Second Empire-styled railroad hotel! 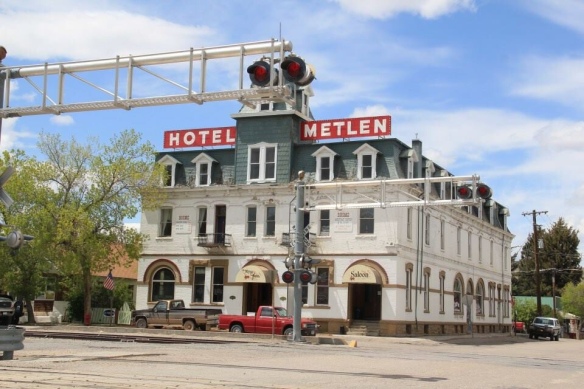 It had upgraded during my last visit in 2012–still classy in a dumpy way, if that makes any sense.

On the opposite end of the state, at Thompson Falls, was another favorite lodging spot, a classic 1950s motor lodge, the Falls Motel. Spiffy now but still Mom and Pop and so far away from the chain experience of today. 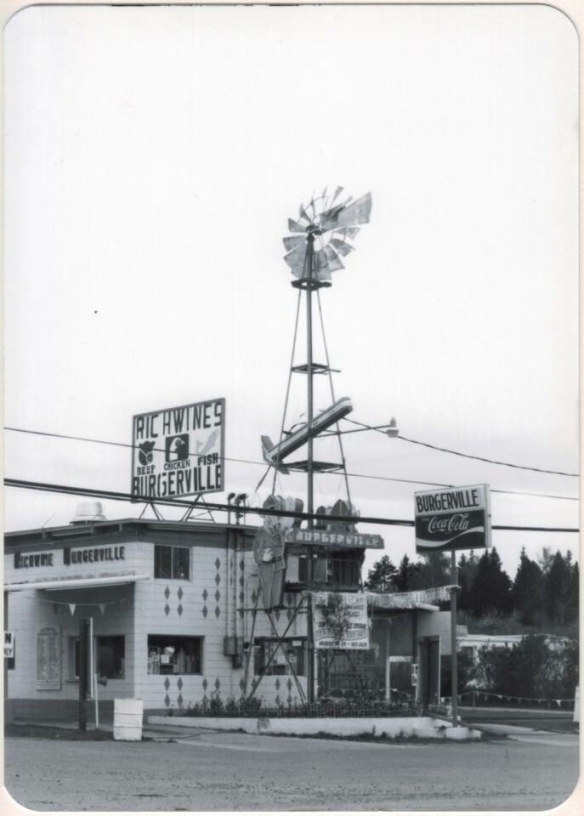 But as regulars of this blog know, I didn’t care where I stayed as long as beef, booze, and pie were nearby. Real rules for the road. The beef could range from the juicy roadside burgers from Polson (the b/w image) to the great huge steaks at Willow Creek (the yellow tinted roadhouse). 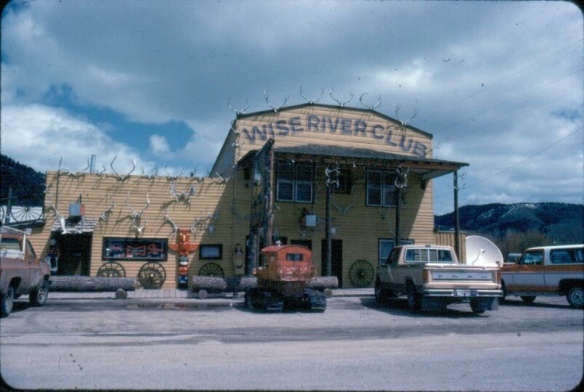 And speaking of roadhouses Wise River Club from 1984 above is still going strong and as friendly as ever. While the owners keep changing at Big Timber–the sign still 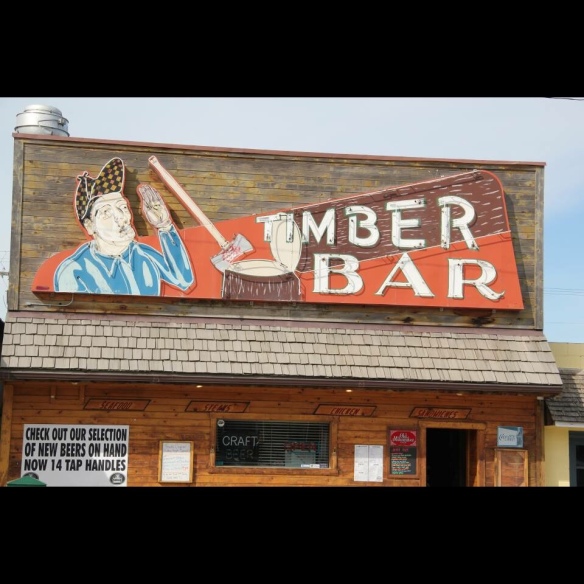 chops away and the beer is still cold. That is what you need on the road.

Wait! Pie matters too, represented by the Wagon Wheel in Drummond, above. Southerners do brag about pie, and I believed in that regional myth, until I traveled Montana. I swear that there are most great pie places in a single Montana County (say, Cascade) than all of Tennessee. On cold days I still think of a Montana cup of coffee (always strong) and a piece of grit pie. In 1984 I just needed that one afternoon stop to push on for a few more hours of driving and documenting the captivating landscape of the Big Sky Country.

On this Memorial Day 2017 it is appropriate to celebrate the many memorials created by Montanans to recognize and commemorate the citizen soldiers who have served the armed forces of the United States.  I am not adding much commentary because the memorials, both large and small, speak powerfully for themselves, and reflect the best of our values as a nation.

One of my favorite new veterans memorials is in Jordan, one of Montana’s smallest county seats, where memorial statuary and plaques with names of those who served stand proudly in the heart of the town. 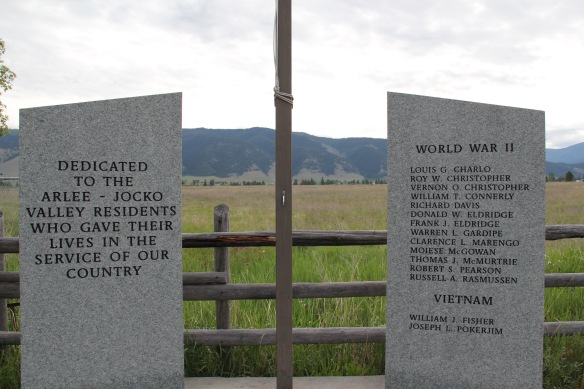 Another compelling new memorial, at least it was installed after my historic preservation plan survey of 1984-1985, are these granite slabs, framed by the mountains, at Arlee.

Dillon had significantly expanded its earlier veterans memorial (on the left) along the federal highway into an impressive new city park, the Southwest Montana Veterans Memorial.

Even with the many changes in Ennis, the town has maintained its Veterans Memorial Park as a beautiful public park. 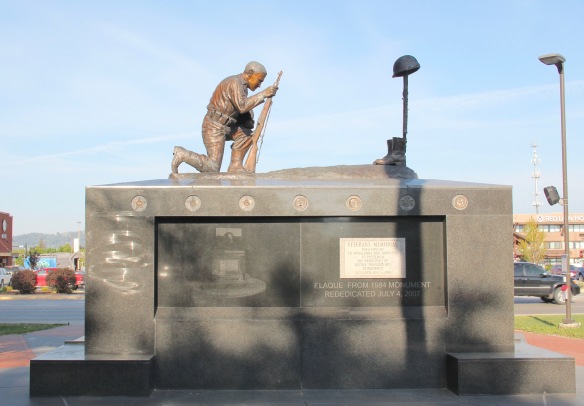 Another change was in Kalispell where the town had significantly expanded an earlier veterans memorial into one of the state’s most impressive monuments, located at the historic start of town on the grounds of the railroad depot.

Another city park with a veterans memorial theme is in Lewistown, where the nuclear missile tells you the role that central Montana still plays in our national defense. 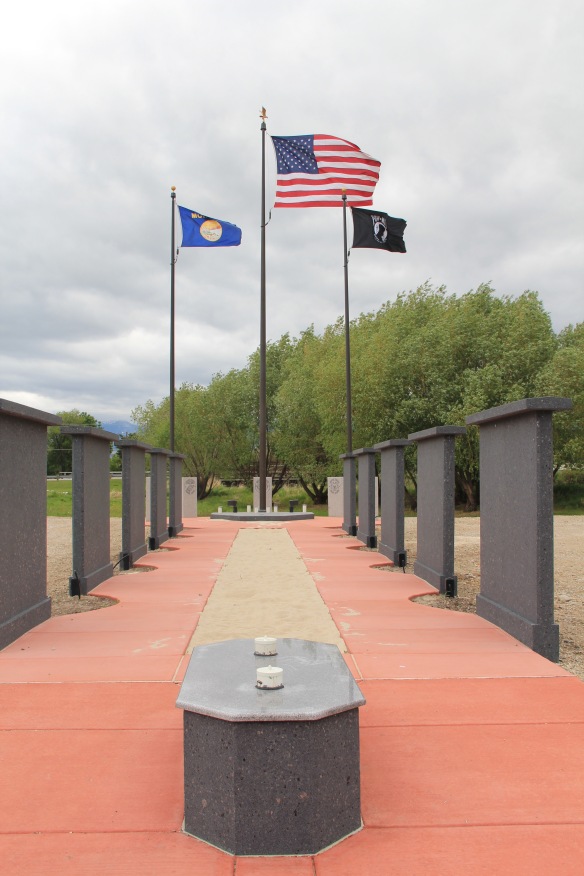 Hamilton’s veterans memorial along U.S. Highway 93 will be a landmark for generations.

There are many more that could be included in this overview but for today I will end with another “new” memorial, at Harlem along U.S. Highway 2.  This somber memorial is to a nearby plane crash in 1992 that claimed the lives of thirteen airmen: an event that shook this tiny town, and now will be forever remembered. 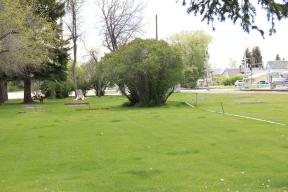 West Yellowstone and Dillon are Montana’s best examples of railroad towns developed by the Union Pacific.  Dillon is the oldest, established as the company’s spur line, the Utah and Northern, pushed north from the main line and headed into the rich mining country of Silver Bow County and environs.  Not only is the historic Union Pacific depot–part of the railroad’s Oregon Short Line–extant, and used as a county museum and theater, so too is the symmetrical town plan of the early 1880s, with the town’s primary commercial blocks facing the tracks. 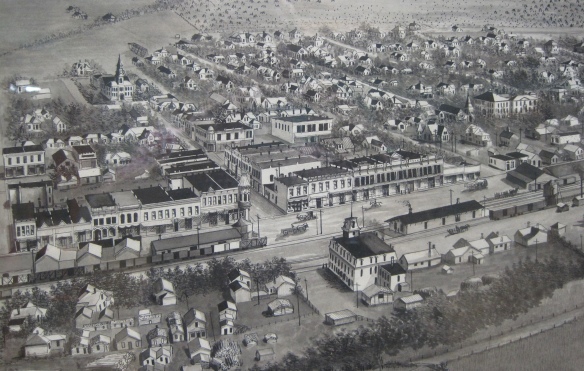 This birds-eye view of the town is at the Beaverhead County Museum at the railroad depot.  It shows the symmetrical plan well, with two-story commercial blocks facing the tracks and depot, which was then just a frame building.  To the opposite side of the tracks with more laborer cottages and one outstanding landmark, the Second Empire-style Hotel Metlen.  The Metlen, listed in the National Register of Historic Places, remains today, one 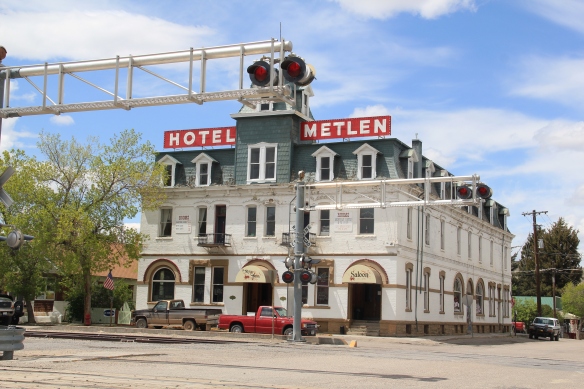 of the state’s best examples of a railroad hotel.  I recognized the building as such in the 1984 state historic preservation plan and my book, A Traveler’s Companion to Montana History, included the image below of the hotel.

This three-story hotel served not only tourists but especially traveling businessmen–called drummers because they were out “drumming up” business for their companies.  The interior has received some restoration work in the last 30 years but little has changed in the facade, as they two images, one from 1990 and the other from 2012, indicate. 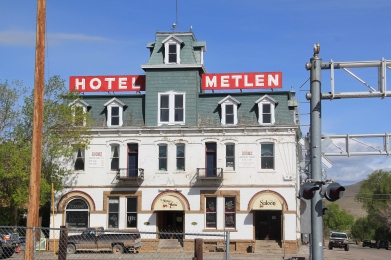 The same can be said for the ornate cast-iron Victorian-styled cornices on the commercial buildings directly across from the depot.  First is a black and white image, c. 1990: note the middle cornice.  The next image, from 2012, shows that the details have been lost in the last 30 years although most of the cornice is intact. 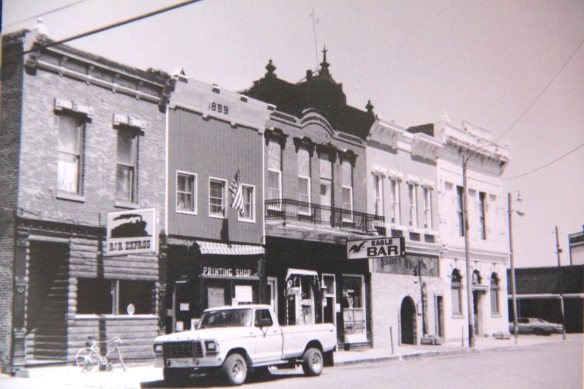 The Dingley and Morse Block from 1888–seen in the historic image of the town at the museum above–has been well preserved and is a significant example of how cast-iron facades defined the look of businesses in Montana’s late 19th century railroad era. 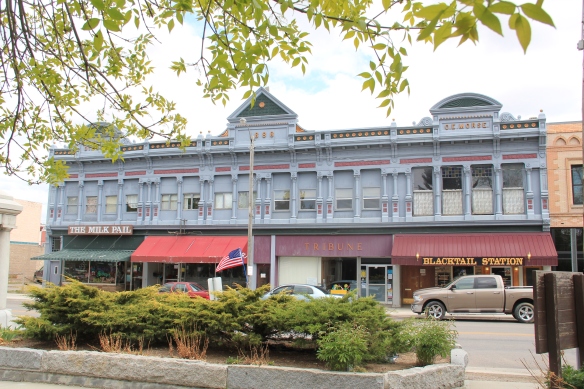 This brief look at Dillon as a railroad town is just the beginning of our exploration of this southwest Montana county seat.  Today Dillon is known as the home of the Patagonia outlet–certainly a key business development here in the 21st century.  But the town’s 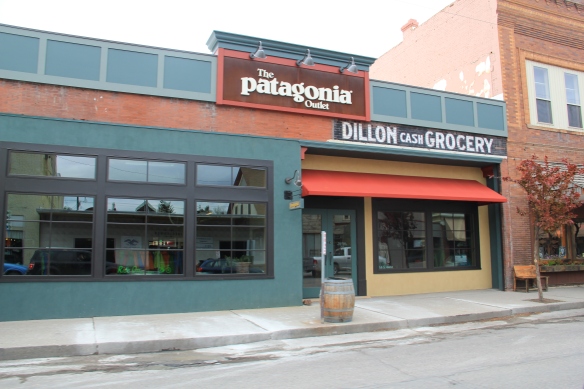 built environment has many stories to tell.