Drummond is the north entrance of the Pintler Scenic Route.  The first ranchers settled here in the 1870s but a proper town, designed in symmetrical fashion facing the railroad tracks, was not established until 1883-1884 as the Northern Pacific Railroad built through here following the Clark’s Fork River to Missoula.

Then Drummond experienced a second wave of railroad-induced growth in 1907-1908 as the Milwaukee Road also followed the Clark’s Fork River on its way from Butte to Missoula, an electrified track that many surviving wood poles mark today. Served by both lines, agricultural and ranching production expanded rapidly, especially when combined by the addition of U.S. Highway 10 through the middle of the town in the 1920s.

The Northern Pacific corridor is still active as part of the Montana Rail Link.

While transportation was readily available, Drummond was surrounded by larger towns so even at its height it rarely topped over 500 residents, meaning that today its historic buildings largely document a typical Montana rural railroad town of the mid-20th century.

There is a faintly classically influenced two-story brick commercial block, a Masonic Lodge made of concrete block, various bars and cafes, a railroad water tank, and a slightly Art Deco movie theater, which was open in the 1980s but is now closed. 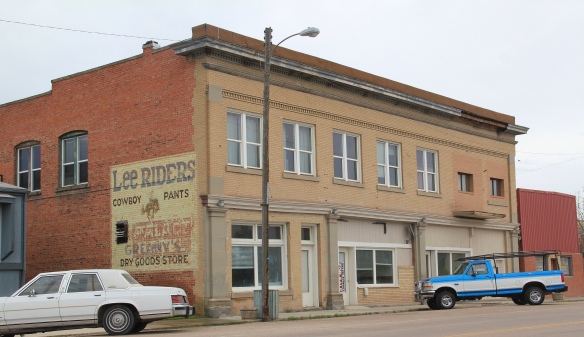 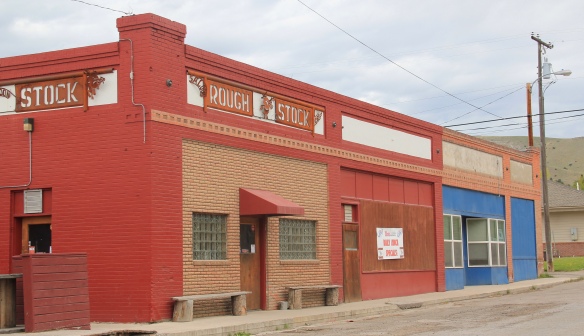 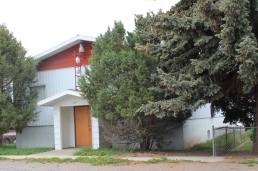 Due to the federal highway and the later Interstate I-90 exit built at Drummond, the town even has a good bit of motel roadside architecture from c. 1970 to 1990.

Between the Northern Pacific corridor and old U.S. 10 is the town’s most famous contemporary business, its “Used Cow” corrals, and now far away, on the other side of the

tracks are rodeo grounds named in honor of Frank G. Ramberg and James A. Morse, maintained by the local American Legion chapter.

The rodeo grounds are not the only cultural properties in Drummond. The Mullan Road monument along the old highway is the oldest landmark.   The local heritage museum is at the New Chicago School (1874), an frame one-story school moved from the Flint River Valley to its location near the interstate and turned into a museum. 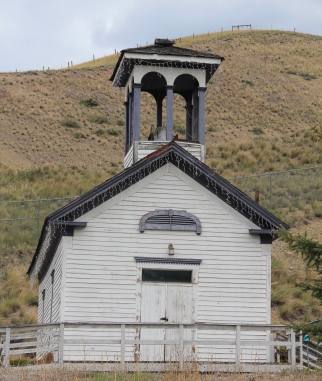 Ironically the town’s historic Milwaukee Road passenger depot is extant, but in the 1980s it was moved to the Fort Missoula museum complex in Missoula for its preservation.

Another local museum emphasizes contemporary sculpture and painting by Bill Ohrmann.  A latter day “cowboy artist” Ohrmann grew up in the Flint River Valley but by the 12960s he was producing sculpture and painting on a regular basis.  The museum is also a gallery and his works are for sale, although the huge sculptures might not be going anywhere. 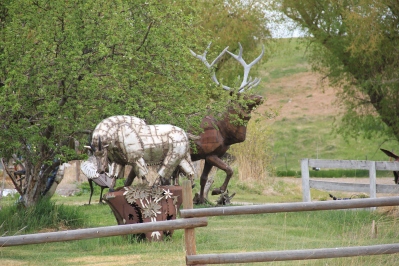 As befitting a Montana agricultural town, community life centers on the library and town hall, the historic Methodist and Catholic churches, and especially the Drummond schools, home to the Trojans.

When I visited Drummond this decade I was glad to learn that while the population almost bottomed out following the closing of the Milwaukee Road and the general economic gloom of the 1980s, it had started to grow, and now totaled approximately 330 people–still a 20% decline over 30 years. I hope this bounce back is not short lived–Drummond remains a favorite place and a good way to end this overview of the Pintler Scenic Route, Montana Highway 1.