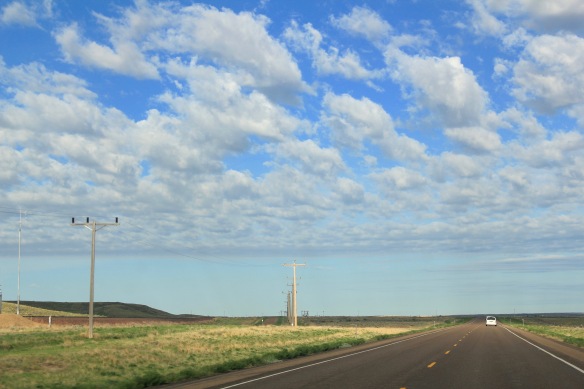 Hinsdale (just over 200 people in Valley County) and Saco (just under 200 people in Phillips County) are two country towns along the Hi-Line between the much larger county seats of Glasgow and Malta.  I have little doubt that few visitors ever stop, or even slow down much, as they speed along the highway.  Both towns developed as railroad stops along the Great Northern Railway–the image above shows how close the highway and railroad tracks are along this section of the Hi-Line.  Both largely served, and still

serve, historic ranches, such as the Robinson Ranch, established in 1891, in Phillips County.  Both towns however have interesting buildings, and as long as they keep their community schools, both will survive in the future.

Of the two towns, I have discussed Saco to a far greater extent in this blog because it was one of my “targeted” stops in the 1984 survey.  The State Historic Preservation Office at the Montana Historical Society had received inquiries from local residents in Saco about historic preservation alternatives and I was there to take a lot of images to share back with the preservationists in Helena.  But in my earlier posts, I neglected two community

buildings, the rather different design of the post office from the 1960s and the vernacular Gothic beauty of the historic Methodist Church, especially the Victorian brackets of its bell tower.

I ignored Hinsdale almost totally in its first posting, focusing on roadside murals.  This Valley County town is worth a second look, if just for its two historic bank buildings.  The former First National Bank and the former Valley County Bank both speak to the hopes for growth along this section of the Milk River Project of the U.S. Reclamation Service in the early 20th century.  Architecturally both buildings were touched by the Classical Revival style, and both took the “strongbox” form of bank buildings that you can find throughout the midwest and northern plains in the first two decades of the 20th century.

The rest of Hinsdale’s “commercial district” has the one-story “false-front” buildings often found in country railroad towns along the Hi-Line. 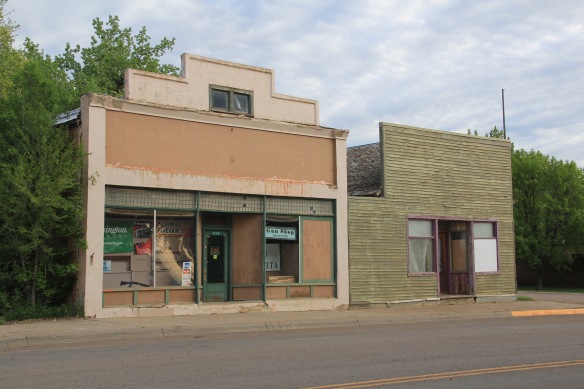 Local residents clearly demonstrate their sense of community not only through the school, which stands at the of the commercial area.  But community pride also comes through in such buildings as the c. 1960s American Legion Hall, the c. 1902 Methodist church (the separated cupola must be a good story), and St. Anthony’s Catholic Church.

These small railroad towns of the Hi-Line have been losing population for decades, yet they remain, and the persistence of these community institutions helps to explain why.

1 thought on “Back on the Hi-Line: Hinsdale and Saco”