Today that same place has been transformed, through adaptive reuse, into a micro-brewery and restaurant–pretty good place too, and a great place in 2015 for me to get out of a persistent rain.  The Northern Pacific reached a deal with rancher Nelson Story in 1882 to build through his property but also provide a spur line to his existing mill operations.  From the beginning both the railroad and local entrepreneurs saw an agricultural future for Bozeman and Gallatin County.

A similar re-energized future has not yet happened for Bozeman’s historic Northern Pacific passenger depot.  The depot is a turn of the 20th century brick building that received a remodeling and expansion from Bozeman architect Fred Willson c. 1922 that turned it into a fashionable (and for the Northern Pacific line, a rare) example of Prairie style in a railroad building.

The depot and adjoining buildings have been designated as a historic district, with a pocket city park providing some new life to the area.  But this impressive building’s next life remains uncertain even as the city encourages creative solutions for the area.

The c. 1922 depot is adequately moth-balled–the new roof has lots of life left–and as the city maintains it is structurally sound with key interior features intact.  Yet graffiti now mars one end of the building, and any building that is empty, especially in such a booming local economy, is cause for concern. 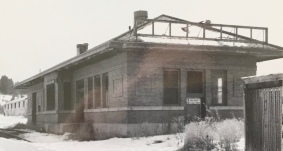 Why?  Because Bozeman has a tradition of tearing down historic railroad depots.  The images above from 1985 were of the town’s Milwaukee Road depot (c. 1907).  It was abandoned then, and I was concerned because so many of the railroad’s buildings had already disappeared across Montana, and because the arrival of the Milwaukee Road in Bozeman had launched an economic boom that shaped the town from 1907 to 1920.  In 2003, despite howls of protest, the building was demolished–a new use for it had never been found.

The same fate did not befell the Milwaukee Road’s other significant building in Bozeman, its concrete block warehouse, shown above in an 1985 image.  The open space, solid construction, and excellent location helped to ensure a much longer life for the building, which is now a building supplies store, with a repainted company sign adorning the elevations of the building.

It is encouraging that the city recognizes the significance, and the possibilities, for the historic buildings along Bozeman’s railroad corridor.  Let’s hope that a permanent solution soon emerges for the empty Northern Pacific depot.

1 thought on “Bozeman and two railroads”