If you arrived in Poplar, Montana, via train, as tens of thousands did 100 years ago, you saw little that made this place seem different than dozens of other northern plains towns.  Grain elevators dominated the skyline; almost as imposing were multi-story hotels–not luxury lodgings but a place to literally land for newly arrived homesteaders or “drummers,” salesmen traveling the line trying to drum up business for industries located in faraway metropolitan centers.

But if you move north away from the tracks and toward the modern-day U.S. Highway 2, a different, distinct world is found, in the historic buildings of the Fort Peck Indian Reservation.  Near the Montana Highway Historical Marker telling the reservation’s story is a historic jail building from the late 19th century–the town’s most identifiable historic landmark in my 1984 work and today. 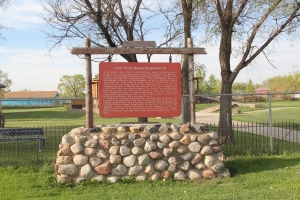 Next to the jail was a new arts and crafts shop, aimed at travelers along U.S. Highway 2, part of a significantly expanded presence for the Fort Peck Community College.

Indeed, the new college buildings are among the most attractive institutional buildings that you can find along the eastern end of U.S. Highway 2 in Montana.  Their bold colors and dramatic placement along the highway demonstrates the importance of education for the future of the Fort Peck Indian Reservation.

North of the new buildings are many historic buildings associated with the reservation’s development in the early 20th century.  Some are abandoned and in poor repair but most are in use, still serving the tribes in the 21st century. 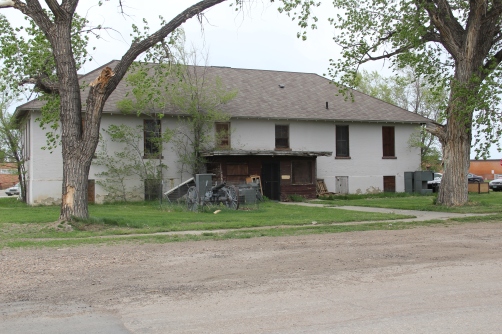 This building was a museum in 1984; now that activity has moved to the highway, better to attract visitors

No doubt as to my favorite new building in Poplar in 2013:  The Perculator.  Not only a classing roadside building, but they also made great coffee–perfect for a long day of fieldwork in the Fort Peck Indian Reservation.