Hot Springs, off from Montana Highway 28 on the eastern edge of Sanders County, was a place that received little attention in the survey work of 1984-1985.  Everyone knew it was there, and that hot springs had been in operation trying to lure automobile travelers since the 1920s–but at that time, that was too new.  The focus was elsewhere, especially on the late 19th century resorts like Chico Hot Springs (believe or not, Chico was not on the National Register of Historic Places in 1984). This section of what is now the reservation of the Consolidated Salish and Kootenai Tribes was opened to homesteaders in 1910 and first settlement came soon thereafter.  The development of the hot springs as an attraction began within a generation.

Due to the 21st century fascination from historic preservationists for the modern movement of the mid-20th century, however, Hot Springs is now squarely on the map as a fascinating example of a tourist destination at the height of the automobile age from the 1930s to 1960s.

Listed in the National Register of Historic Places, Symes Hotel and hot springs takes you back to the era of the Great Depression.  Fred Symes acquired the family property and opened the Mission-style hotel in 1930.  It has changed somewhat over the decades, but not much.  The narrow hallways of the baths, with their single tubs ready for a soak, are still in operation.

What the Symes did for Hot Springs was to make it a destination, and to give a vernacular Mission-style look to other buildings from that decade such as the old Mission style building below and other storefronts on the town’s main street. 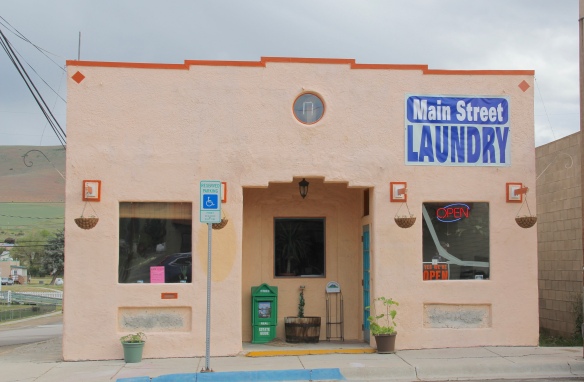 Not everything fit into this mold, naturally.  There remains a representative set of gable-front shotgun-form “cabins” that housed visitors staying for several days and various one-story buildings served both visitors and year-round residents.

Then a few years after World War II the tribe decided to invest in the town through the creation of the modernist landmark known as the Camas Hot Springs, truly a bit of the International style on the high prairie of western Montana.

From a photo in the lobby of the Symes Hotel.

This venture initially was successful and led to a population boom in the 1950s and 1960s but then as the interstates were built and the 1970s recession impacted travel choices, the Camas struggled and closed c. 1980.  For the last 30 years this grand modernist design has been slowly melting away.

The loss would be significant because few mid-20th century buildings in Montana, especially rural Montana, are so expressive of the modernist ethos, with the flat roofs, the long, low wings and the prominent chimney as a design element.  Then there are the round steel stilts on which the building rests.

As this mural suggests, today Hot Springs embraces its deep past as a place of sacred meaning to the Confederated Salish and Kootenai.  And it continues to try to find a way to attract visitors as a 21st century, non-traditional hot springs resort.

10 thoughts on “The Hot Springs of Sanders County”