When most people think of Ravalli County they think of the ever suburbanizing northern half, as you take U.S. Highway 93 south–a four lane highway–from Missoula and encounter the new suburbs of Florence.  But if you use U.S. Highway 93 from the southern end, you find a very different place, one that starts with Ross’ Hole. 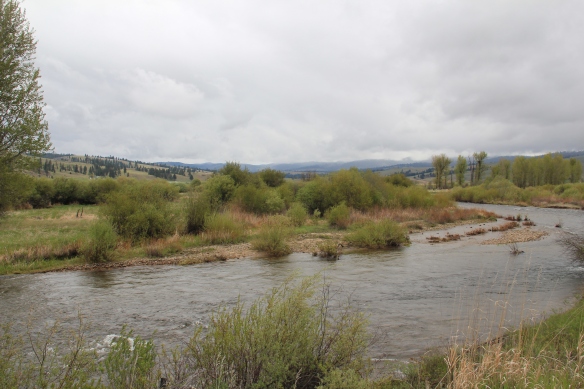 There are few more beautiful places in the state, even on this cloudy day in 2012, the hole beckoned, as it has for centuries.  In western American history, its importance has multiple layers, from ancient Native American uses to the peaceful encounter between Flathead Indians and the Lewis and Clark Expedition in 1805.  Without the horses the expedition acquired from the Flathead, its journey would have been much more difficult, if not impossible.

Montana “cowboy” artist Charles M. Russell painted the scene as a prominent historical mural in the House of Representatives chamber at the Montana State Capitol in 1912. His composition, as I used to like to point out when I gave state capitol tours in 1982, emphasized the centrality of the Native Americans in the region–the expedition were minor characters, in the background of the painting’s right side.  The place name Ross’s Hole refers to Hudson Bay Company trader Alexander Ross who traded there in 1824.  Hole was a trader and trapper term for mountain valley.

At the time of the 1984 survey, Ross’ Hole was interpreted by this single wooden sign, now much worse for the wear of the decades.  But like many important landscapes in the state, today you find a rather full public interpretation in a series of markers sponsored by the Montana Department of Transportation, the U.S. Forest Service, and the Lewis and Clark National Historic Trail.

Sula is the primary “town” of Ross’ Hole, and its 20th century settlement history is chartered by two community institutions.  A local grass-roots preservation group has done a great job of restoration of the historic school building–a one-room frame building that fits into its rural surroundings brilliantly. 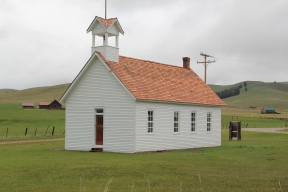 The Sula Community Club dates to 1915, although its clubhouse is a more recent building of rustic log style–while the nearby Sula Post Office is a more contemporary, bland take on “rustic”style.

Nearby all three of the buildings is a historic beaver slide hay stacker, another reminder of the early 20th century ranches that represented a new era in the hole’s history.

Any trip to Ross’ Hole would not be complete with a stop, however brief, at the roadside architecture-a log bungalow–home to the Sula Community Store, which can basically provide you with about anything you might need while traveling on U.S. Highway 93. 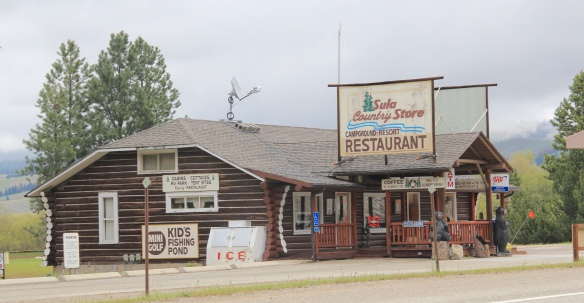 And the coffee is always hot, and strong.