When I was conducting the fieldwork for the state historic preservation plan in 1984-1985, Gallatin Gateway and U.S. 191 was still outside of Bozeman, untouched by the subsequent suburban and commercial explosion of the county.  In wake of the Milwaukee Road’s bankruptcy and closure in 1980, the state historic preservation office’s focus was on one property in particular, the railroad’s spectacular Gallatin Gateway Inn.

Built in 1927 and designed in a Spanish Revival style–not common in Montana in that time for major commercial buildings–by the firm of Schack, Young, and Myers, the Inn had been listed in the National Register in 1980.  The nomination noted both its distinctive, rich architectural statement but also its purpose in 1920s tourism traffic for

the railroad–it was the Milwaukee’s gateway to the West Yellowstone entrance of the national park.  Electric trains would move passengers from the main line at Three Forks,

stop here, the end of the line, where bus transport would take them on to the park.  Consequently the “inn” was a bit of misnomer.  There were only a bit over 30 guest rooms, but huge dining rooms, and an expansive comfortable lobby and public space where travelers would wait for auto transport on U.S. 191 to the park.  The Milwaukee was a latecomer to the railroads’ push to Yellowstone:  the Northern Pacific had a generation earlier secured its gateway at Gardiner and built the magnificent Old Faithful Inn inside the park.  The Union Pacific had arrived from the south and built its gateway and rustic-styled dining room at West Yellowstone.  The Milwaukee could not duplicate that–but it could give travelers a bit of the exotic in its Spanish Revival railroad/highway gateway property. 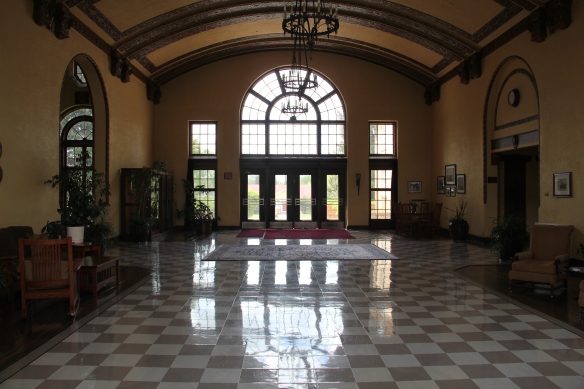 Here was a 1920s railroad terminal where the highway facade, shown above, was actually the more prominent feature, more than the second entrance, shown below, facing the tracks and the end of the line. 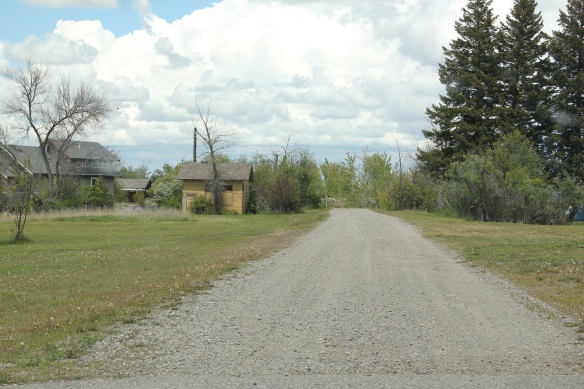 The gravel road is what is left of the original Milwaukee roadbed, looking north towards Three Forks

I visited the Inn several times in the 1980s, staying in the period rooms, later having quite a fine dinner there when the inn was rehabilitated and opened as one of the “Historic Hotels of America” properties as designated by the National Trust for Historic Preservation.  With the overall boom in the economy of Gallatin County, I frankly assumed by 1990 that the inn’s future was secured–this rare jewel had been saved.

Then in 2013 the inn closed, and it was still shuttered when I visited in May 2015 (although clearly the building and grounds were being maintained).  Surely a new use, and a new life, can be found for this Montana landmark in the 21st century.  Across the street from the inn is a community landmark that proves that the past has a future in this part of Gallatin County–the historic Gallatin Gateway school.

Its simple yet forceful facade, with projecting central entrance and its solid brick construction has given it a life into this century as part of a growing community.  Let’s hope for the same for the Gallatin Gateway Inn, and soon.