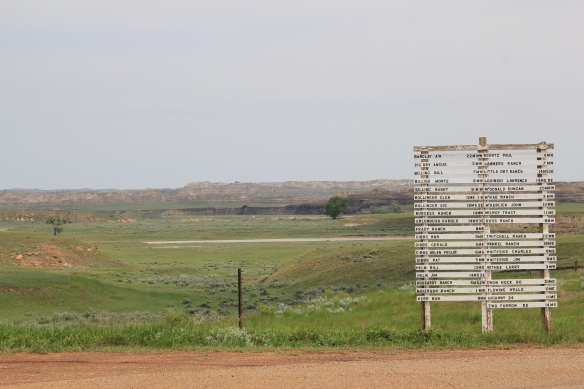 Before I began crisscrossing over Montana in 1984 for the state historic preservation plan, I sought out ideas and locales from friends, colleagues, and others knowledgeable about the state’s history and built environment.  No one could offer anything about Garfield County, which I found surprising because the county was huge in size, and located smack in the middle of eastern Montana, with major north-south and east-west state highways crossing at Jordan, the county seat.  I knew the population was sparse–just over 1600 in 1980, making it one of the least densely populated places in the lower 48, and the least densely populated place in Montana.

But as you rolled into the county via Montana 200–which became a favorite route of mine by the time I was done with the survey in 1985–I just knew there had to be something here, especially at Jordan, the county seat, numbering about 485 people in the early 1980s but now just 340 plus residents in the 2010s. 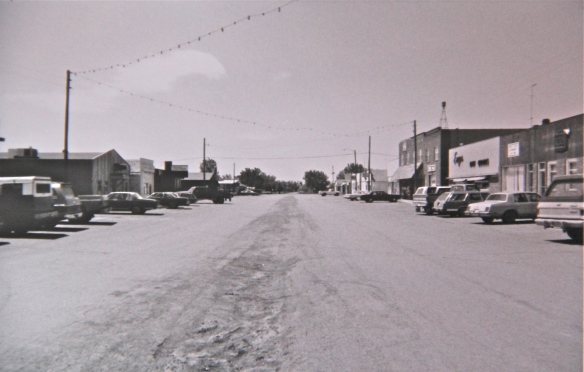 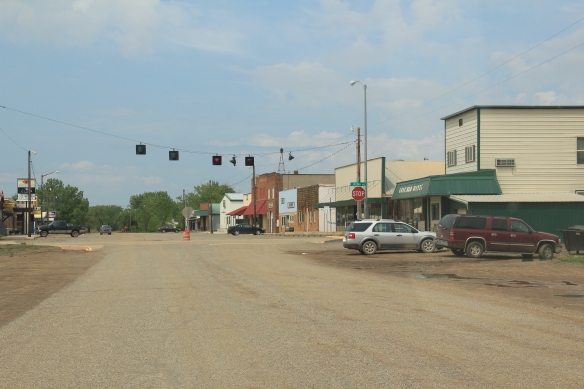 Despite the drop in population over 30 years, Jordan had not remained frozen in time–as I sorta expected to find–but rather changes were everywhere.  Traffic signals were at the crossroads of MT 200 and Main Street; Main Street had been paved.  The historic high school dormitory (1936) for Garfield County–a property type of the early 20th century that absolutely fascinated me, that kids came and stayed the week in town for school due to the distances otherwise they would have to travel daily–was still there, but shuttered. 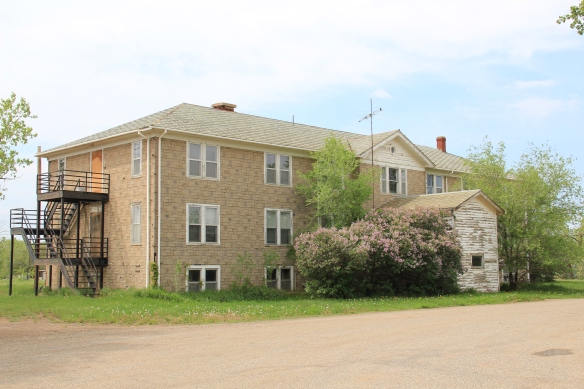 Both times I had visited Jordan in the 1980s, students thought it weird that I found their “dump” to be interesting, and historic:  but it was, and still is:  creating community, even temporary, in the far-flung reaches of the northern plains was important to the New Dealers who helped to fund the dorm in 1936.  This building should be on the National Register of Historic Places; Garfield County has no National Register buildings, just one historic site, the Hornaday camp, associated with the Smithsonian’s study of the “last” buffalo in the late 19th century.

The historic high school adjacent to the dormitory, another New Deal building from 1936, still stood too, but it had been renovated and remodeled, keeping its general shape and simple classical entrance but little else from its 1980s look; across the street was a new annex and gym.  There was also a shiny new elementary school but that did not mean that the old Jordan Elementary from 1930 was gone:  in 2013 last touches were underway to turn it into the town’s library.

In 2013, the biggest change to my eyes was the courthouse.  In 1984 I was captivated by this tiny, frame courthouse, that looked more like a mid-20th century tract home than a county’s primary public building.  Indeed, I circled through the town a bit more than 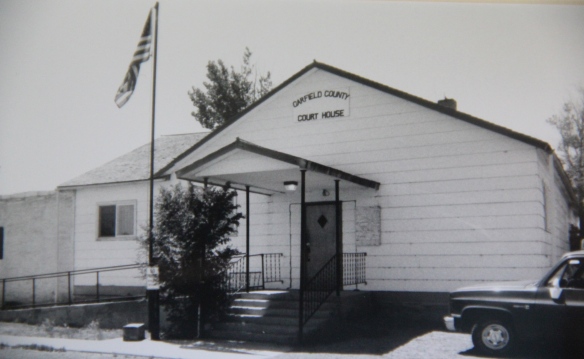 needed:  the old courthouse was no more, lost in a c. 1998 fire.  The new county courthouse was a red brick building, the former 1960s county-owned, modernist-styled hospital, perhaps the biggest change I encountered in Jordan. 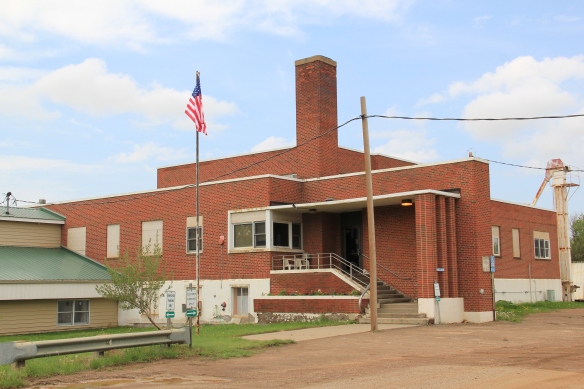 The new Main Street bars were also a surprising but welcome change. Ranchers and Hell Creek bars speak to images and realities of Garfield County. 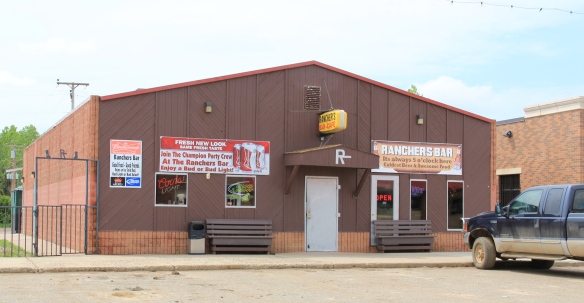 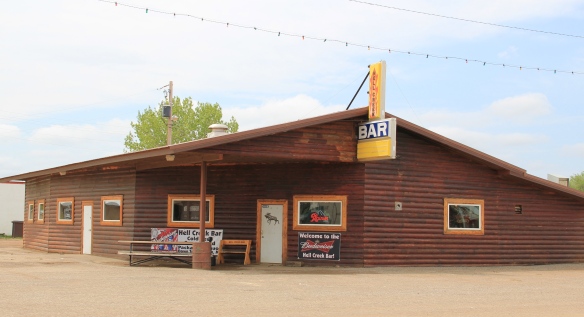 Another change was the growth of the local heritage offerings, from the Veterans Memorial park, kiosk, and sculpture to the Garfield County museum in Jordan–the old schoolhouse making it easy to locate along the road–and various reminders to passerby’s, like the mural on the town’s old service station/auto dealership, that the county had been a major location of dinosaur finds in the late 20th century. 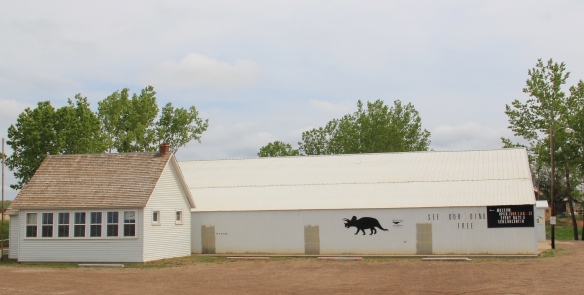 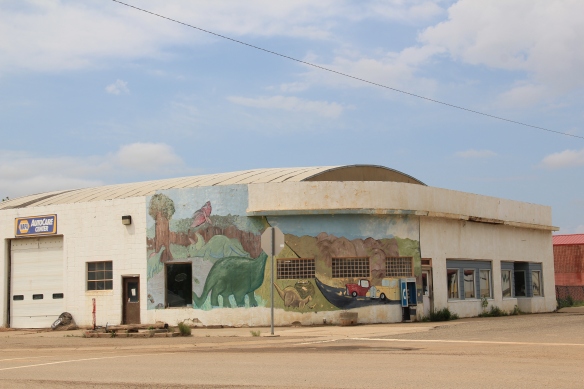 The old schoolhouse at the museum is also a reminder that one-room schools still operate in Garfield County.  When I came through in 1984, the county school superintendent encouraged me to visit them, but also warned me that some were on basically roads cut into the ground, and if there was rain, never go that way, unless I wanted to stay awhile.

But one-room schools along MT Highway 200 are easily located, at Sand Springs, and then at Big Dry.  In 1984 I was shocked at the persistence of such tiny buildings across the region; their persistence 30 years later say much about commitment to a land many have left and forgotten. Past ways and smallness of life in the biggest of countries still shape Garfield County, Montana. 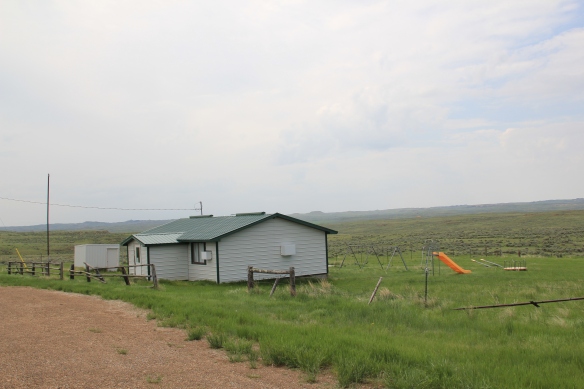 2 thoughts on “Garfield County: the forgotten land of eastern Montana”