A week ago a colleague from Tennessee told me of returning to Cut Bank–a family place that she had not been to in decades–and we talked of what a great, classic town it is, and how the town uses blank walls to tell their own story to the hordes of tourists who pass through on U.S. Highway 2 on their way to Glacier National Park. The homesteader-theme mural is just one of the several that enliven the streets and instruct those who wish to stop, look, think.

Montana’s art and history have always been closely linked as even those in the first generation of settlement commissioned artists, Charles M. Russell and Edgar Paxson, to paint historical murals for the new state capitol building in Helena.  Then came the public art commissions of the New Deal era, such as the work of J. K. Raulston (below),

which once hung in the Richland County Courthouse in Sidney (and now displayed at the Mondak Heritage Center in Sidney) and the numerous murals that graced new post offices and federal buildings across Montana, the one below from Dillon demonstrates

that the arts program of the 1930s stretched across Montana, from Sidney to Dillon.

When I lived in Helena in the first half of the 1980s, of course I noticed murals, such as one above on the state’s important women’s history on Last Chance Gulch, which itself had various installations of interpretive sculpture to tell the story of a place that had been so “renewed” as to lose all meaning. 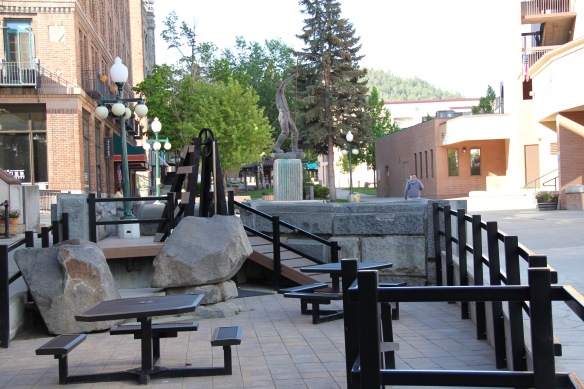 In my second shot at documenting the historic landscape of Montana, in the first half of this decade, I couldn’t help but notice how many places used murals to tell their story, or to hint about what mattered to those who traveled by–they truly were everywhere.  On the walls of cafe/bars like at Melrose:

Or they could be at old service stations at once important crossroads, like at Jordan: 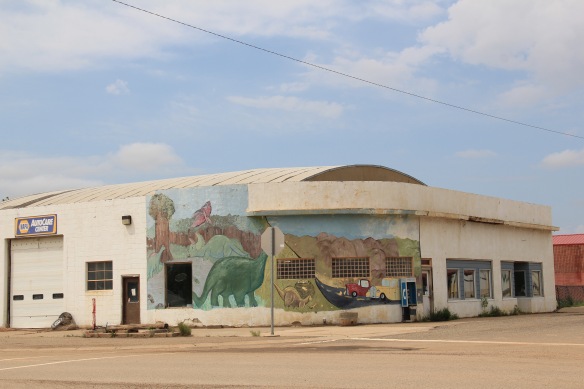 Scenes of landscape and animals–the wild side of Montana are common: 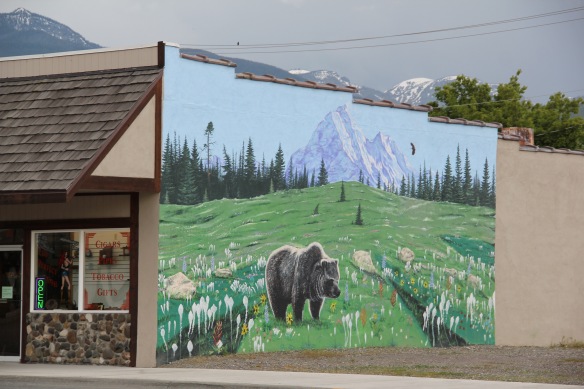 A grizzly at Libby, Montana.

A bison at the Western Chick Cafe in Broadus.

But many tell a story, perhaps no more elaborately than in Columbia Falls, where the historic Masonic Lodge is wrapped in a mural that links the town to its logging beginnings to the establishment of the town and merchants.

Another northwestern Montana town–the gateway town of Eureka on U.S. Highway 89. uses a mural to set the scene of a quiet, peaceful place no matter the season:

Whereas at Troy–another gateway town at the western edge of Montana on U.S. Highway 2–the town name itself is emblazoned on a building–you can’t miss it.

Many towns highlight their history with murals.  The one in Townsend (below), on U.S. Highway 12, reminds me of a common heritage-centered art piece found everywhere–a quilt with each square representing a different community or place name. 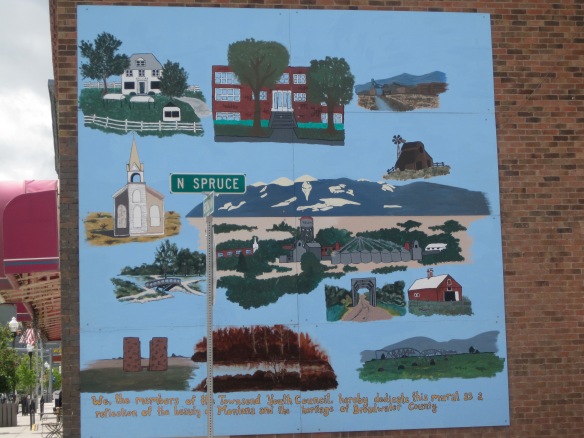 Others are more pointed in their message.  A lone tractor in a field stands out in Chester, the seat of Liberty County: 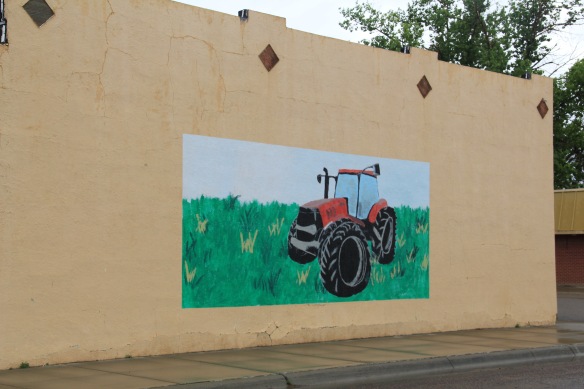 Wilsall, on U.S. 89 north of Livingston, tells a rather elaborate story–of days when the town was vibrant and its railroad as an important link between the region and the state.

In Fairview, at the North Dakota border, a mural depicts the historic Noyly bridge, an engineering marvel that sits now out of town, forgotten excepts by locals.

Butte perhaps has the most effective set of public art to tell its story–where there was so little 30 years ago there are interpretive settings throughout the town of past glory days and key events, topped by a monumental mural in the heart of Uptown.

As a trend in public interpretation, I love the generation of new public art in Montana as much as admire the art of the New Deal era that adorns and emboldens our post offices.  All of these creative expressions (the mural below is from Deer Lodge) remind anyone that the past is always present in the Big Sky Country. 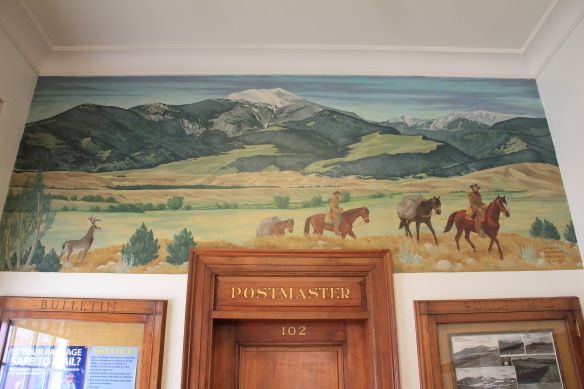