As promised in the last post, we are taking a bit of a detour and exploring some of Montana’s bars, especially those with the name Stockman’s or Stockmen’s.  The Stockman’s Bar in Missoula is certainly the most famous one in the state, as it has

entertained generations of Grizzly students and fans–note the window mural. But it is just one of several favorite Stockman’s Bars I have encountered in my Montana fieldwork. My top choice is actually on the other end of the state–almost in North Dakota in fact–the Stockman’s Bar in Wibaux.

During my initial work of the 1980s, the large electric sign still worked–and those words just beckoned you to come in, especially as the interior was lit up with the large glass block windows.  This place was a drinkers’ hangout–you went down to the Shamrock for food.

But cattle and sheep country–at least historic towns associated with stock growing–are where most of the Stockman’s Bars can be found.  Wolf Point’s Main Street is famous for its commercial strip, named Front Street faces the highway and tracks of the Great Northern Railway.  One of historic institutions along that corridor is the Stockman’s 220 Club, a real institution for residents and travelers. 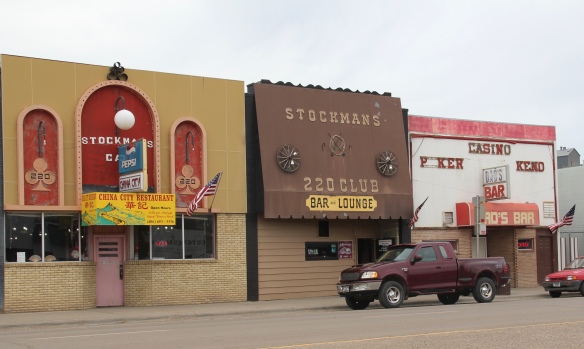 Another altered facade is at the historic Stockman’s Bar in Roundup, another livestock growing center and the seat of Mussellshell County.

My favorite combination bar/restaurant with the Stockman name is in the Livingston’s historic district.  I rarely come to town without a stop at this drinking landmark. 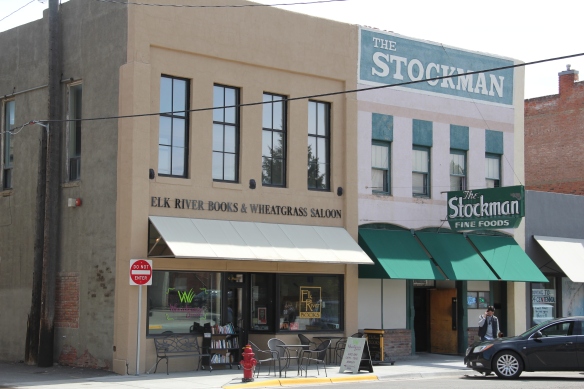 These buildings are a mere sampling of the Stockman’s Bars in Montana. There are more to explore in all sections of the state, from Bridger to Kalispell.