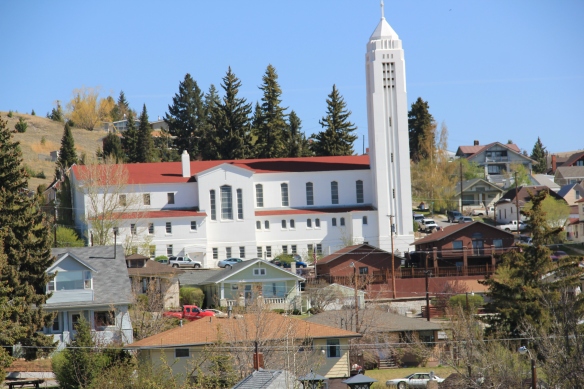 Towering over the Butte cityscape, in competition with the corporate symbols of the steel head frames for dominance, are the steeples of Butte’s churches, in themselves powerful symbols of the ethnic diversity that make up the population of the copper city.  This posting hardly pretends to cover all of the city’s historic churches–consider this a sampling of sacred spaces that too often are taken for granted. 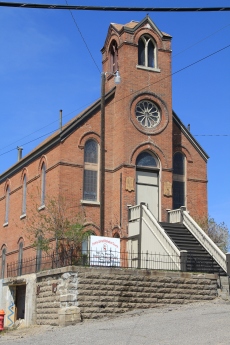 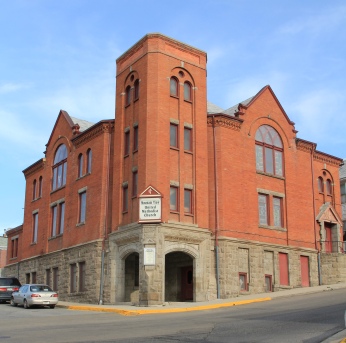 Let’s begin with two landmark Methodist churches.  Cornish miners built the Romanesque-style Trinity Methodist Church in 1889 in Walkerville.  Methodist mine owners, Uptown merchants, and professionals attended the Mountain View Methodist Church (1899-1900, Link and Donovan have been identified as architects) in the middle of Uptown’s bustling business district near the county courthouse.  Butte Art Glass Company designed, built, and installed its wonderful stained glass. When I re-visited Butte in 2012, both congregations obviously were struggling with members, and the cost of maintaining large historic buildings.  They tried to get by by treating the two churches as part of the same congregation.  But in 2015, the congregations closed the churches. 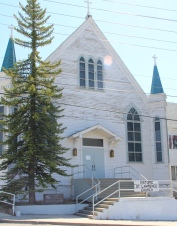 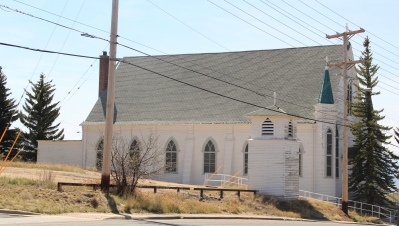 The vernacular Gothic of the St. Lawrence Catholic Church (1897) in Walkerville hides what may be one of the most spectacular church interiors in all of Montana.  Frescos from 1906 adorn the ceiling, carved woodwork enlivens the interior, and there in a 1944 M.P. Möller organ.  The congregation left the church years ago, and now a local preservation group keeps the building alive, renting it for gatherings, weddings, and the like.  But the future remains uncertain, and the sad fate of all three of these first churches speak to the decline in numbers of the city’s traditional ethnic communities in the last two generations. 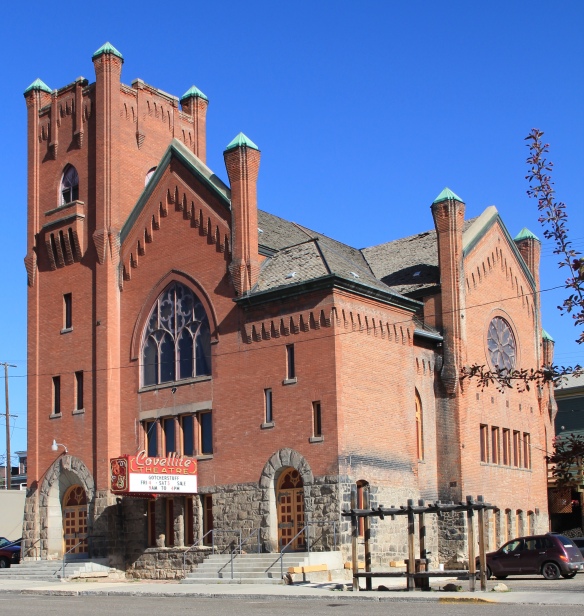 Will the ultimate fate be similar to the grant Romanesque-styled First Presbyterian Church (1896), now the Covellite Theatre?  Last year, a proposal came forward to convert what had been a community theatre since the 1960s into a movie house in for Uptown residents.  Can, again, a viable use be identified for one of the grandest church buildings in the state? 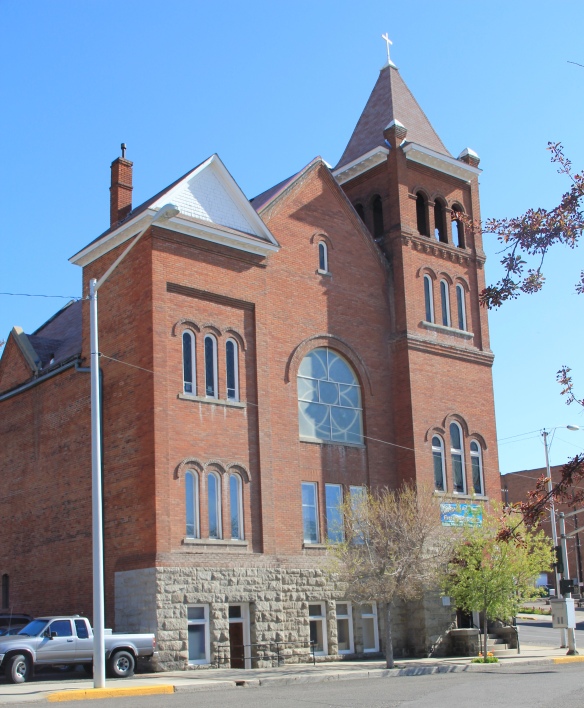 First Baptist Church is another fine example of Romanesque style in stone and red brick in Butte.  Built in 1907-1908, the building, designed by architects Charles Passmore and Company, has been a downtown anchor ever since. Its two round stained glass windows came from the Ford Brothers Glass Company in Minneapolis. 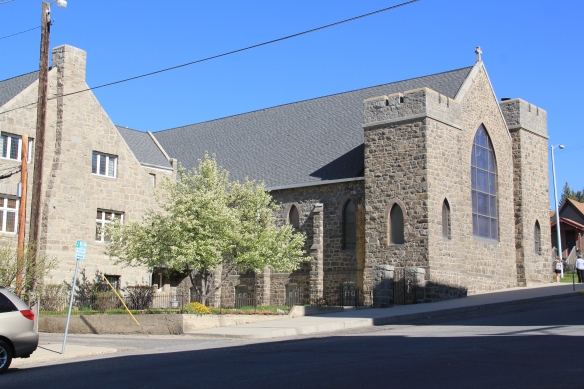 Stone work in a Gothic style reminiscent of a Cotswold village parish distinguishes St. John’s Episcopal Church in Butte.  Built in 1881, with later additions in the 20th century, the church is considered the oldest in the city.  Copper magnate William A. Clark lived nearby and he helped to fund the church. 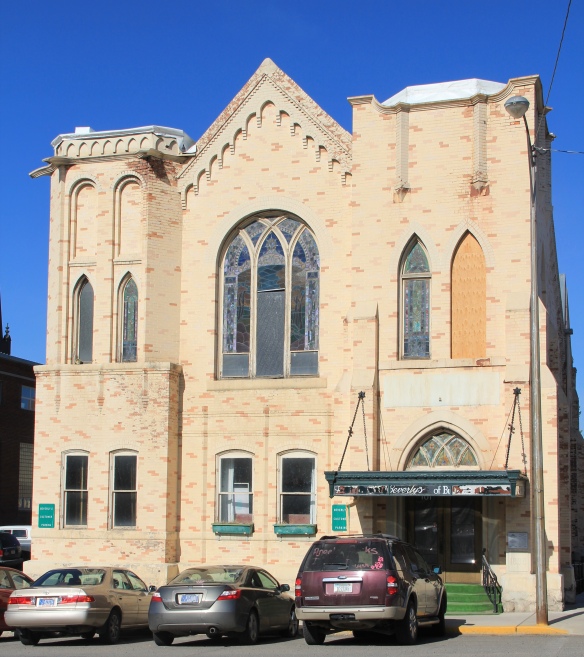 The original St. Paul Methodist Episcopal Church South (1899) was designed by architect William White in a restrained Gothic/Norman style similar to that of St. John’s Episcopal.  But the real significance of the property lies with its association with miners’ attempts to organize and the influence of the International Workers of the World (IWW or Wobblies) in Butte history.  The property’s National Register marker summarizes it nicely:  “By 1918, the church housed the Butte Daily Bulletin, a radical newspaper voicing policies of the anti-corporate Nonpartisan League, published by William F. Dunne. The office was also a known stronghold of the incendiary Industrial Workers of the World (IWW). On September 14, 1918, local police and federal troops under Major O. N. Bradley raided the Bulletin, arresting twenty-four men and thwarting a miners’ strike.” 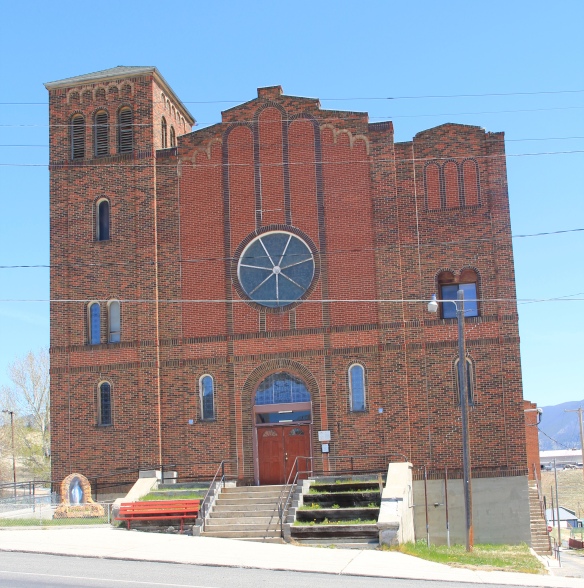 Another Gothic landmark listed in the National Register in Butte is St. Mary’s Catholic Church, now home to a Catholic women’s foundation, on North Main Street near the federal building.  The congregation was among the city’s earliest but a fire destroyed the church building leading to construction of this building at the onset of the Depression. 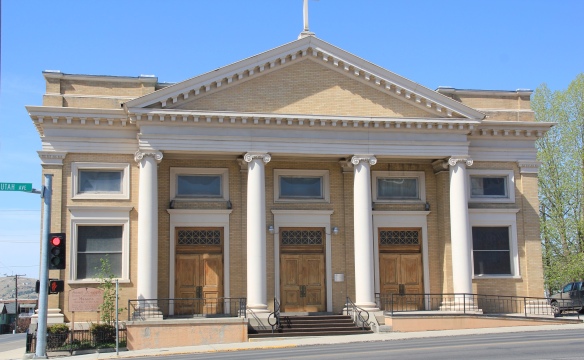 St. Joseph Catholic Church is quite different in its architecture, a strong statement of Classical Revival from 1911.  The architect was Austrian-born Albert O. Von Verbalism, who also designed the magnificent High Victorian Gothic St. Helena Catholic Cathedral in Helena.    St. Joseph is still an ethnically vibrant congregation some 100 years later. 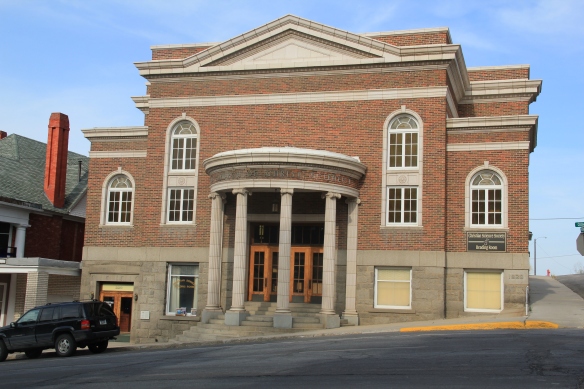 The Christian Scientist Church follows the blending of Colonial and Classical Revival design so often found in the congregation’s churches no matter their location in the United States.  This building dates to 1920 and Walter Arnold was the architect. 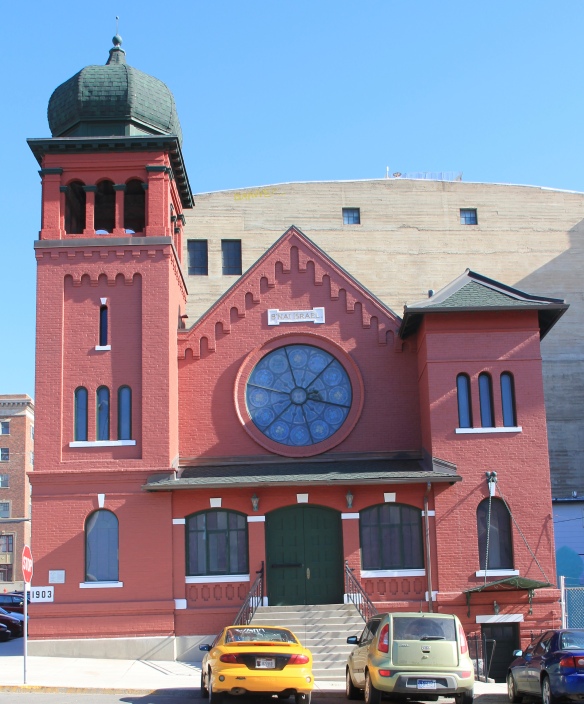 Perhaps the grandest of the Uptown religious buildings is the Onion-dome steeple of the historic B’nai Israel Synagogue (1903), which was one of three Jewish houses of worship in Butte and is now the oldest synagogue in continuous use in all of Montana. 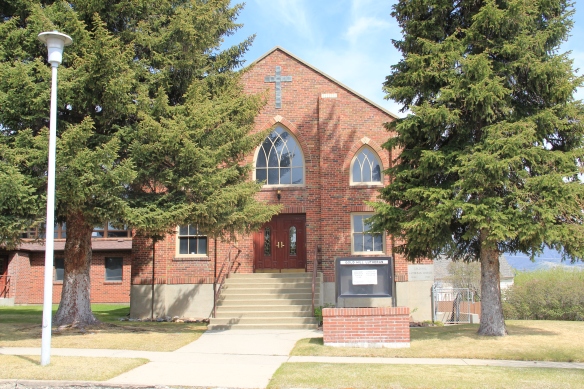 On a far different scale is the Gold Street Lutheran Church.  Built in a restrained, late interpretation of Gothic style in 1936, the church shows the continued expansion of Butte’s religious centers from the Uptown area into what is called the Flats, where so many congregations now reside. 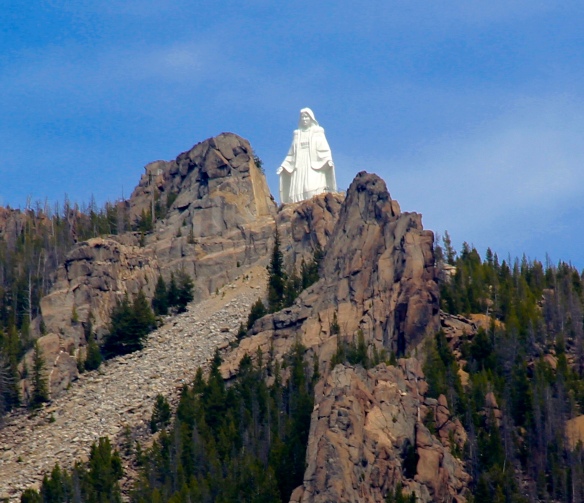 And, of course, now overlooking the historic city and its surrounding suburbs is Our Lady of the Rockies, a massive symbol of the region’s religious faith, built in the 1980s.  Approximately 90 feet high–the third tallest statue in the United States, the project was a community effort.   Laurien Eugene Riehl, a retired Anaconda engineer, is credited with engineering the site and the statue.