The public landscape of Anaconda has already been touched on in this blog–places like Washoe Park, the cemeteries, or Mitchell Stadium for instance.  Now I want to go a bit deeper and look at public buildings, both government and education in this smelter city.

Let’s begin with the only building in Anaconda that truly competes with the stack for visual dominance, the imposing classical revival-styled Deer Lodge County Courthouse.  When copper baron Marcus Daly created Anaconda in the 1880s it may have been the industrial heart of Deer Lodge County but it was not the county seat.  Daly was not concerned–his hopes centered on gaining the state capitol designation for his company town.  When that did not happen, efforts returned to the county seat, which came to Anaconda in 1896.  The courthouse was then built from 1898-1900. 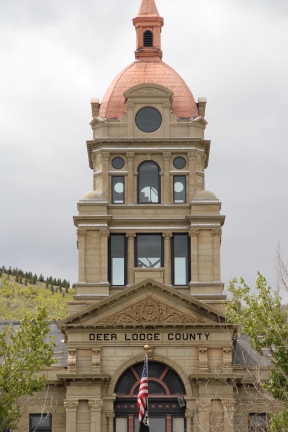 Daly didn’t have the state capitol but he did have a county courthouse worthy of landmark status: their architects, Charles E. Bell and John N. Kent were also the architects for the Montana State Capitol in Helena. What truly sets this county courthouse apart from many 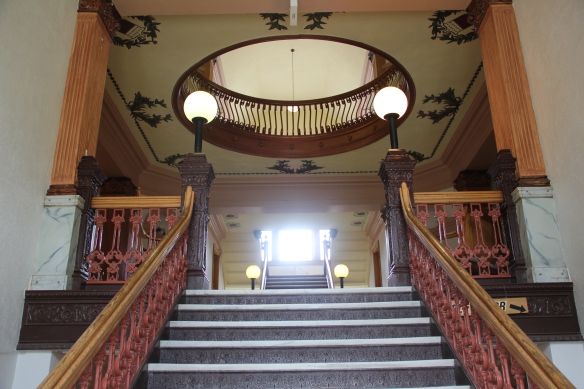 in Montana is the lavish interior of the central lobby and then the upper story dome.  The decorative upper dome frescoes come from a Milwaukee firm, Consolidated Artists. Newspaper accounts in 1900 recorded that the completed courthouse cost $100,000. 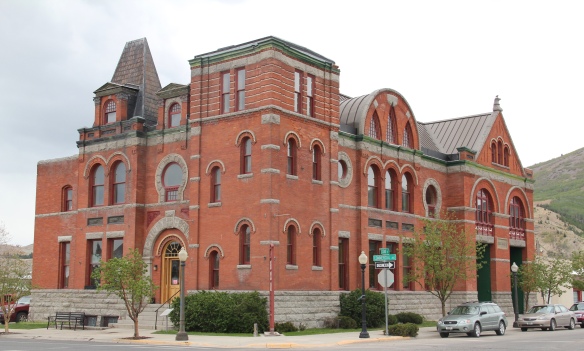 The bombastic classicism of the courthouse was at odds with the earlier more High Victorian style of City Hall, built 1895-1896, and attributed to J. H. Bartlett and Charles Lane.  But classicism in the first third of the 20th century ruled in Anaconda’s public architecture, witness the Ionic colonnade of the 1931-1933 U.S. Post Office, from the office of Oscar Wenderoth.

Public schools in the first third of Anaconda’s development also reflected Victorian traditions, such as the understated Collegiate Gothic of the Junior High School, 1927-1928, from the Great Falls architectural firm of Shanley and Baker.

Once Anaconda, bursting at the seams following the boom of World War II, chose to upgrade its public schools, it took a decided turn away from traditional European influenced styles and embraced modernism, as defined in Montana during the 1950s.

The long, lean facade of Lincoln Elementary School (1950) began the trend.  Its alternating bands of brick punctuated by bands of glass windows was a classic adaptation of International style in a regional setting.  The modernist bent continued in 1950-1952 with the Anaconda Central High School, the private Catholic school, now known as the Fred Moody middle school, only a few blocks away.  Except here the modernist style is softened by the use of local stone, giving it a rustic feel more in keeping with mid-20th century sensibilities and the Catholic diocese’s deliberate turn to modern style for its church buildings of the 1950s and 1960s (see my earlier post on College of Great Falls). 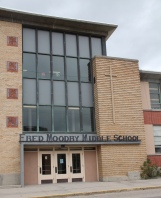 The celebration of symmetry in a factory-like style advocated ed by some mid-20th century modernists is no better stated than in the Anaconda Senior High School, the public high school completed in 1954-1955 and designed by the Montana firm of J. G. Link and Company.

If anyplace in Montana better conveys the post-World War II turn in public education to resemble the corporate ethos beginning to dominate American culture it is this high school building.  From the railroad depot, at the bottom of Main Street, one catches a glimpse of the long horizontal facade, and immediately think–there’s a corporate office, maybe a factory, up the street. This is one interesting building.

So too is a very different building as to purpose but not to style, the National Guard Armory.  Appropriated by Congress in 1960 and built in 1961 for an estimated $66,000, the armory is a functional concrete building that speaks well to the style of modernism so often associated with military buildings of the Cold War era.