Ingomar was another town identified in last week’s Great Falls Tribune article about the “monumental divide”–the vast landscape in central and eastern Montana defined by the drainages of the Missouri and Yellowstone rivers.  Ingomar, in Rosebud County, is a Milwaukee Road town located along U.S. Highway 12.  If you know nothing about Montana, that sounds like a fairly central location, and that the town, by extension, must have some size to it.

The opposite is true.  Ingomar is a tiny place, with a handful of residents, but one of the most famous places in eastern Montana due solely to the Jersey Lilly Bar–one of the state’s iconic community centers and watering holes. 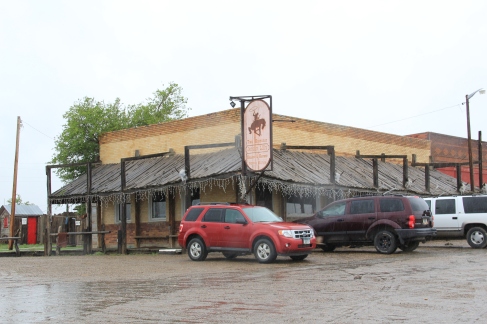 The Jersey Lilly is the town’s former bank, built in the first decades of the 20th century when hopes for this place as a rising town along the Milwaukee Road were at their highest.

But the homesteading bust of the 1920s was especially cruel in this northern part of Rosebud County.  The well-designed brick bank found a second life as a bar, serving locals primarily but also those adventuresome travelers who used US 12 to crisscross the region. I first came here 30 years ago–the ramshackle wood awning and posts existed then, giving the place a Wild West look that seemed out of place then but now with age seems perfectly legit.

Thirty years ago, the local school still served students; it survives but now as a “Bunk n Biscuit” and proclaims itself as the only place to sleep within a 100 miles.

Ingomar has other historic buildings that remind you of past prominence, including a faded sign on a general merchandise and equipment store and especially the town’s extant Milwaukee Road depot, now a private residence.

Indeed, the residents use an old train car of the Milwaukee Road to identify its roots in the railroad age–good thing since the tracks long disappeared here after the Milwaukee went bankrupt over 30 years ago. 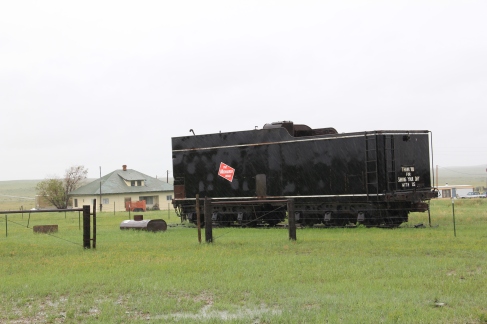 Despite its isolation, and the bust of the railroad, Ingomar has lasted better than many towns of the homesteading era.  Give thanks to local residents who won’t let the town wither away and especially to the Jersey Lilly, one of the state’s most rural National Register properties but certainly one of the places you want to visit along the “montinental divide.”